Interest in Additive Manufacturing is building rapidly. The technology is appealing because high-value, low-quantity parts can be made quickly and cost-effectively without the need for tooling. It offers another benefit in the potential for weight reduction by producing complex designs not attainable with conventional manufacturing.

The challenge for manufacturers is knowing whether a cast or forged metal part will perform equally well – or better – if it is additively manufactured. This is particularly important to designers in the aerospace and defence industries, where a part failure may have catastrophic consequences. Additionally, as the automotive industry changes from internal combustion engine (ICE)-powered vehicles to electric vehicles (EVs), the need for lightweight AM parts is rapidly increasing.

Materials Resources LLC (MRL), an additive metals research and manufacturing company and defence contractor in Dayton, Ohio, USA, answers this question for its customers using testing, computer modelling, artificial intelligence, and optimised AM machines. In addition to its consulting work, MRL describes itself as a ‘fast factory’, offering customers rapid, low-volume AM production and prototyping in-house.

MRL continually improves its understanding of materials and Additive Manufacturing processes, with the goal of providing accurate, predictive-model based qualification. To predict the fatigue behaviour and strength of a material, MRL researchers needed to see inside additively manufactured sample parts. They needed a Computed Tomography (CT) system – and didn’t have one.

Originally used as an imaging tool for the healthcare industry, CT has also proven to be a powerful resource for industrial applications. X-ray and Computed Tomography are widely used tools for non-destructive testing (NDT). A CT scan produces a two-dimensional density map of a cross-sectional slice of an object’s interior. A 3D volumetric model can be produced from these views, taken at many different viewing angles, which are then reconstructed using a computer. Many 2D slices can be combined by powerful software to produce a 3D image of practically any part, object, or product. This is critical for any application wherein a manufacturer wishes to see inside an object without destroying it.

Through a third party, MRL began sending additively manufactured fatigue samples – approximately 5 cm, made of aluminium, stainless steel, and cobalt alloys – to Yxlon, a leading manufacturer of NDT inspection systems. Yxlon offered inspection services at the company’s North American lab in Hudson, Ohio, USA. The requirement was to be able to detect flaws as small as 10 μm, and multiple samples were to be scanned at once to reduce cost, without losing the needed resolution.

The application engineer at Yxlon received the parts, scanned them using an FF35 CT system, and provided Computed Tomography datasets to MRL. The FF35 CT is a high-resolution Computed Tomography system designed to achieve extremely precise NDT inspection results for small-to-medium sized parts with a base area of up to approximately 51 cm x 79 cm. With regard to additively manufactured parts, the system detects structural irregularities (e.g., pores, cavities, and cracks) and geometrical deviations (e.g., insufficient wall thickness). The inspection system met the requirements for the project, as it featured dual micro and nano focus tubes.

MRL used the inspection data for two different tasks. First, the system was used to detect bonding issues, critical to determining quality without destroying the part. Second, the system measured porosity, data that MRL experts used to determine quality levels and the effect on mechanical properties.

By understanding the micro- and meso-scale characteristics of AM materials, MRL can predict the suitability of a part for an application. The company uses a strategy called Integrated Computational Materials Engineering (ICME), which integrates the latest advances in computational science, and the principles of materials science, for engineering solutions.

The data provided by the FF35 CT system was critical to building accurate models, because no other technology at MRL could peer inside thick parts and reveal tiny structures and flaws. Some of the typical flaws that come from the Laser Beam Powder Bed Fusion (PBF-LB) process can be detected easily by Computed Tomography, including porosity, lack of fusion, keyholes (due to metal evaporation), excessive surface roughness and material discontinuities. The ability to see inside an object is critical because internal structures can be seen in their functioning position. The CT scan data makes it fast and easy to identify these issues early in the manufacturing process, reducing manufacturing time and increasing productivity. In addition, software programs for industrial CT scanning allow for measurements to be taken from the CT dataset volume rendering. These measurements are useful for determining the clearances between assembled parts or other functional relevant dimensions (GD&T).

As the volume of samples increased, MRL took the decision to invest in a CT system from Yxlon, rather than continuing to sub-contract the inspection work. MRL now uses the FF35 CT system for defect measurement using 2D imaging and CT scan for defect prediction in high-strength aluminium, steel, titanium, and magnesium alloys. “Then we try to link that data to the microstructure of the material, the process parameters of the PBF-LB machines, and the expected properties of the manufactured part,” stated Dr Salem.

The research that drives the predictive modelling depends on a huge amount of data collected by the Yxlon system. Salem said that for a titanium alloy, the modelling requires at least a 10 mm x 10 mm sample scanned at half a micron resolution. “Combined with sensor data and other inputs, many hundreds of millions of pieces of information are captured, stored, and put in our machine learning tools for analysis,” he explained. “Then we put those results into our predictive models.”

MRL researchers also use the YXLON FF35 CT system to validate those predictive models in subsequent samples and to inspect quality during manufacturing. Dr Salem continued, “After we finish a part, the micro-CT system enables us to inspect the areas of high stress without breaking the part. This ensures that the part does not have anomalies that may negatively impact its performance.”

Fig. 2 gives an example of the data used in the validation process. It shows a visualisation of planned lack of fusion defects as captured by melt pool monitor sensors and constructed into a 3D view. Spherical lack of fusion features as small as 50 μm were captured in various special locations in the sensor calibration cube. All of them were in excellent agreement with ground truth measurements made by the FF35 CT System.

MRL also uses Computed Tomography data to calibrate the AM machine’s in-situ sensors. To validate the functionality of the sensors, MRL additively manufactured a cuboidal sample of 17-4PH stainless steel on a 3D Systems ProX® DMP 200 AM machine. An artefact of the word ‘DEFECT’ was designed into the sample to represent a loss of fusion. Technicians used the FF35 CT system to scan the cube and validate whether the sensor measurements were correct. Fig. 3 shows two images side by side: an image from melt-pool monitoring sensors and a CT scan. The scan is a quantitative confirmation of the agreement between post-processing micro CT data and in-situ meltpool monitor measurements.

Dr Salem has stated that the company also plans to offer non-destructive testing as a service to manufacturers in the southwestern Ohio area. By providing state-of-the-art FF35 CT equipment, as well as onsite training and technical support, Yxlon is helping MRL move forward in its goals for problem solving in the AM industry. 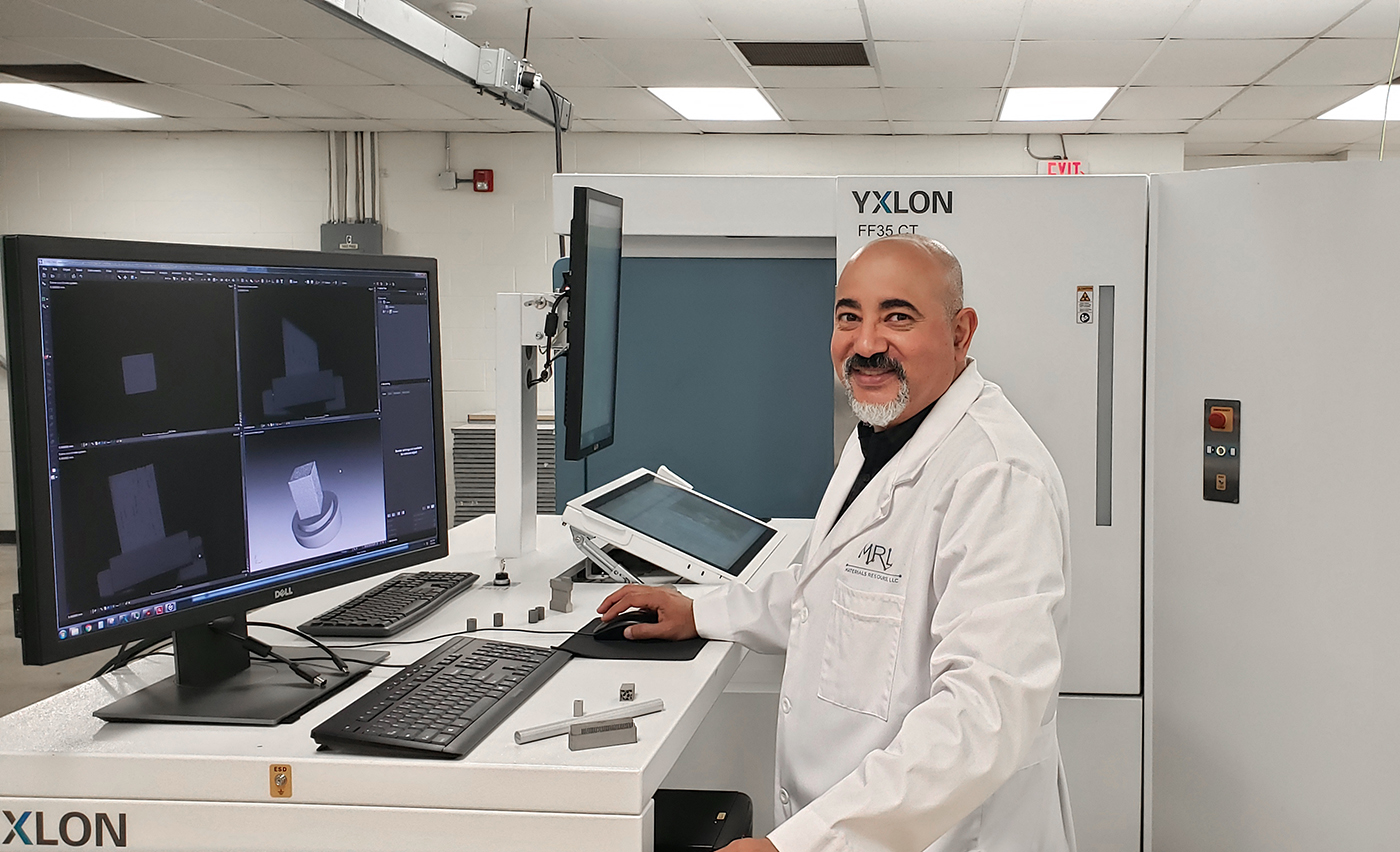