Above Mach 5, atmospheric air becomes thousands of degrees with a pressure of several hundred psi; the air can even become chemically reactively if high enough speeds are reached. These extreme conditions pose a problem to vehicle-propulsion systems which burn fuel to achieve thrust.

To avoid the rocket breaking apart, Zucrow Labs is focused on learning everything possible about the critical turbulent (reacting) flow physics that must be accounted for when an engine reaches hypersonic speeds.

The Velo3D and Zucrow teams worked together to rapidly prototype the team’s designs for testing, evaluation, and design iteration. Slabaugh and team then used the data from the prototypes to scale up their designs into a full-scale system, which Velo3D also additively manufactured.

“Through our partnership, we helped Velo3D to understand the design requirements for high-speed combustion systems, and they taught us how to better design for Additive Manufacturing,” said Slabaugh. “This is the sort of mutually beneficial relationship we build with industry partners as we solve the challenges associated with advanced technology transition.”

Because even designing and manufacturing parts for hypersonic conditions is understandably expensive, much of the R&D for developing hypersonic capabilities has been supported by NASA and defence-level budgets. Flight testing these systems is expensive, and has major limits on what can be actually measured for research purposes, so engineers lean heavily on earthbound solutions to develop new technologies at a lower cost. To do this, engineers like the ones at Purdue recreate the conditions experienced during hypersonic flight and proving-out engine components in ground-test facilities.

“We engineer components that will experience hypersonic environments while going zero miles per hour and staying bolted to the ground,” Slabaugh explained.

For some time, advanced computer simulation software has been a valuable tool for engineers who need to explore the relationship between complex physics and physical structures. Methods like computational fluid dynamics (CFD) and fluid-structure interaction (FSI) can be used to simulate material and structural behaviour in response to the flow of air or liquid, allowing engineers to optimise their designs before manufacture.

Hypersonics, however, is extremely unpredictable and can defeat even sophisticated computer-simulation capabilities.

“One fundamental problem is that we can’t reliably predict the flow and flame conditions within the engine at hypersonic conditions,” added Slabaugh. “Reacting, turbulent-flow is extremely complicated to model with CFD; we’re at such extreme levels of turbulence and flow conditions that we just can’t capture everything that happens as the flame evolves. Within the flow, you have evolving density, viscosity, velocity, species, etc., and when you add in mechanical structures like engine walls to contain the flame, you get even more complicated with cooling designs that can also affect the flow and flame. The computational power you need to analyse even the smallest part of this engine is hugely expensive — and the end result is that many simplifying assumptions must be made for integrated design analysis.”

So how do engineers overcome this kind of problem? Leave simulation behind and return to the real-world manufacturing paradigm of ‘build and break’ with Velo3D’s additively manufactured burner. This will be used to create a hypersonic flow environment within a test cell.

The ability to quickly additively manufacture a variety of injector geometries for the test combustor — in this case made out of Hastelloy X, one of the few high-strength, high-temperature superalloys that can withstand the hypersonics environment — enabled the Purdue team to rapidly identify which design worked best.

Slabaugh explained, “Effectively, if you want to test a hypersonic vehicle on the ground you build a rocket engine with a big converging-diverging nozzle and a supersonic plume of extremely hot gas; the ‘fireball’ that the vehicle is flying through. The whole system is bolted down into lots and lots of concrete.  You then stick whatever component you’re designing inside that plume and watch what happens.”

“With Velo3D,” he continued, “we’re designing the injectors for that combustor to produce very specific turbulent flow fields that mix fuel at a certain rate and allow us to stabilise a very powerful flame in a very compact volume. This creates the conditions for all the things we’re going to test downstream.”

Nick Strahan, a test engineer working on Slabaugh’s team, stated, “We had essentially approached this problem with traditional subtractive manufacturing techniques in mind before. But there were some features in our design that would have limited the performance of the combustor — and doing it additively with Velo3D instead enabled us to integrate our unique geometry much more easily.”

The engineers subtly varied the flow passages of the injector with five different designs (tweaking the STEP data file that the Velo3D Sapphire system’s build-preparation software accommodated automatically), additively manufactured them and ran them through a gauntlet of hypersonic-relevant test conditions.

“The Velo3D end-to-end manufacturing system produced dense parts requiring minimal post-processing,” added Strahan. “With just a little bit of cleanup machining, we could install them into our research-scale combustor for testing. We could then measure the combustion efficiency produced by each geometry with the goal of generating a flow that is chemically and thermodynamically similar to the atmosphere at very high flight speeds.”

In two weeks, the team was able to isolate the highest performing injector that had all the stationary and dynamic features they were looking for. The injector met the critical parameters that the engineers valued most for performance of the combustor: flame power (as a proxy for the simulated flight conditions) and flame stability (a metric for the health and efficiency of the combustor).

“Both power and stability were necessary for us to create the realistic ground-test environment with our device, but these are often very difficult parameters to balance in a large-scale device,” said Professor Slabaugh. “We were able to tune the injector geometry and flow conditions independently in our testing to achieve optimum outcomes with these two, inseparable parameters. We see AM as a powerful tool with which we can bring other creative engineering solutions to complex design problems into reality more quickly.”

Now that the single injector design has passed rigorous testing, the aim is to assemble a large array of them into an even more powerful combustor. Velo3D is consulting further with Zucrow labs to help them take advantage of Additive Manufacturing by integrating the injector set into a single additively manufactured component. From there, the engineers will continue to refine and assemble a complete combustor system, aiming for full-scale hypersonic test capability in the fall of 2022.

“Additive is really helpful in the research context where we are continually trying out different configurations of parts,” continued Slabaugh. “At the same time, with this 3D printed injector part, we couldn’t tell the difference between it and a machined part in many ways. Ten years ago this technology seemed like a fantasy, but we are now getting AM parts that can go straight into our engines off of the printer—which is pretty amazing.”

He concluded, “AM is an enabling technology for the combustion devices, thermal-management systems, and structural components across many of these disciplines, including hypersonics, and will no doubt prove to be especially valuable in this field going forward.” 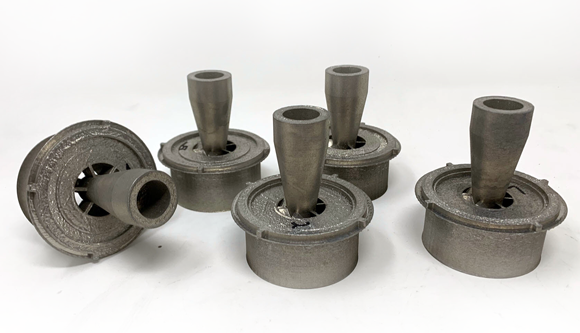