In PBF-LB, the local high-temperature molten metal fits the surrounding solid part owing to thermal expansion. Following solidification, this generates negative thermal stress. This residual stress accumulates toward the upper layer and can lead to effects such as delamination, cracking and warpage, all of which scale with the end part and are asymmetric in nature. This can make the integrated moulding of large metal parts (e.g., rocket nozzles) extremely challenging.

To overcome this challenge, the researchers employed a numerical methodology called the ‘recurrent formula inherent strain method’ to analyse the residual deformation. In this, they modelled the lattice based on the effective stiffness and anisotropic inherent strain using a gradient-based optimisation algorithm.

The team simultaneously optimised two aspects of the Additive Manufacturing process: the laser hatching orientation and the internal structure of the fabricated material by considering layer-wise residual stress stacking. Accordingly, the team fine-tuned its methodology in an attempt to ensure the synergetic influence of simultaneous optimisation.

In addition, the team performed experiments to verify their novel methodology using quasi-2D plates, 3D brackets, and 3D connecting rods. Compared to the standard benchmark designs in use, their design strategy was shown to have reduced vertical edge deformations by 23–39% in quasi-2D plates. In the cases of 3D brackets and connecting rods, the warpage reductions ranged between 13–20%.

“Recent improvements in metal 3D printing technology have made it possible to produce larger moulded parts. In this light, our methodology should ideally enable 3D printing of any large metal part,” stated Professor Akihiro Takezawa, Waseda University, who led the project. 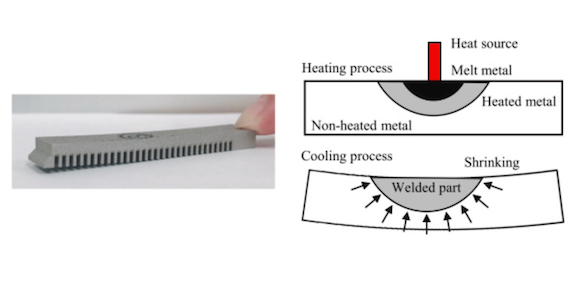