Renishaw, Wotton-Under-Edge, Gloucestershire, UK, has continued its partnership with British Cycling to contribute to the track bike for the Great Britain Cycling Team (GBCT). Team members raced the bike at the Lee Valley Velodrome as part of the Birmingham 2022 Commonwealth Games, July 28-August 8. Renishaw has partnered with British Cycling since 2019, when it helped to produce parts for the track bike which won seven medals at the Tokyo Olympics.

Lotus Engineering and Hope Technology first collaborated to develop the new bike, focusing on speed to maximise its performance and push for medals. British Cycling then approached Renishaw to join the development team, bringing with it its experience lightweighting complex components with Additive Manufacturing.

“The Commonwealth Games was a brilliant opportunity to display the innovation of British engineering, as well as British talent on our home turf,” stated Ben Collins, Senior Additive Manufacturing Application Engineer at Renishaw. “The riders needed the best equipment to perform at such high levels. By providing tailored AM parts to the cycling team, we’ve delivered the performance the team requires while also highlighting the potential of AM in producing high-quality strong, lightweight, and complex components.”

Renishaw’s Additive Manufacturing team rapidly manufactured and prototyped metal and plastic parts during the bike design process to ensure the parts provided optimal aerodynamics. Rapid testing was essential; while carbon fibre is the most effective material for lightweight yet strong engineering, this requires injection moulding which takes longer from design to finished part than Additive Manufacturing methods. Creating a different mould for every design change made with carbon fibre means a slow testing process, whereas additively manufactured titanium allows for further innovation with part design, plus quicker turnaround during prototyping.

British Cycling was reported to have benefitted from the rapid precision of Additive Manufacturing when designing the parts that require customisation, such as the handlebars, which Renishaw additively manufactured for British Cycling at the Tokyo Olympics. 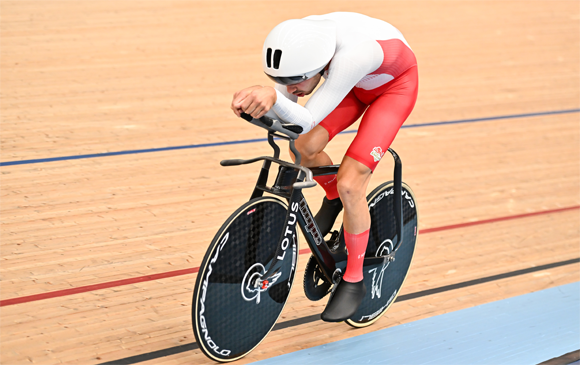