CoreTechnologie GmbH, headquartered in Mömbris, Germany, has launched a new software version of the 3D_Evolution DMU Inspector for collision checking. The latest version of the integrated tool has an optimised web interface and enables fast analysis of large 3D CAD data as well as efficient collaboration between development teams.

The software was developed specifically for the needs of mechanical and plant engineering. The new tool makes it possible to ensure that there are no collisions before assembly and indicates all penetrations between components. This is said to reliably prevents expensive modifications and delays during the assembly of machines.

In mechanical and plant engineering, the distinction between contacts and an actual collision is crucial for a successful collision analysis. Inaccurate, tesselated models often display thousands of non-existent collisions, making reasonable collision detection difficult. To address this challenge, DMU Inspector was developed as a tool to generate collision analysis on the exact CAD models rather than on a triangulated approximation. This allows more precise differentiation between contact and penetration to display only real collisions.

For collision detection of large amounts of data, the multiprocessor calculation of the DMU Inspector software enables calculation on a large number of processors. The documentation of the results and the collaboration of the development teams of the data centrally hosted on a single server thus becomes more efficient. Users can log into a project, view the collisions in a web browser and perform a detailed analysis in the integrated 3D viewer. In contrast to static reports (e.g., PDFs), the project progress is documented dynamically in the DMU Inspector. When the assemblies are recalculated, only the modified and corrected components as well as directly adjacent components are re-examined for collisions.

The tool enables a fast display of large data and a clear representation of the analysis results. Collisions between components or subassemblies are displayed in a list of the web browser and details of the collision can be viewed in the 3D Viewer. Filter and project management functions support the successful cross-team collaboration.

The DMU Inspector supports all common CAD formats such as Catia, Nx, Creo, as well as STEP, JT, PLMXML, Solidworks and Inventor assemblies. Due to the independent database and the numerous interface formats, the software is flexible and immediately ready for use in any PLM environment without complex integration. 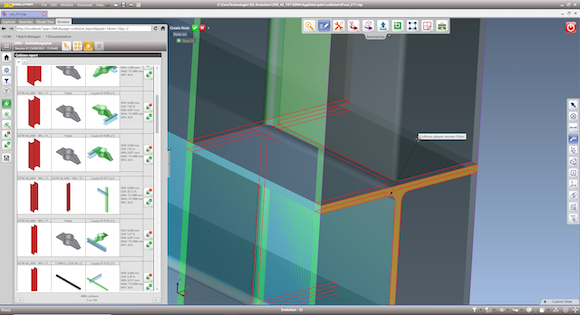