SPEE3D, headquartered in Melbourne, Australia, reports that the British Army has requested the company’s support as part of a concept assessment through the US Army Future Command’s Project Convergence 2022. SPEE3D states that it is one of the first Additive Manufacturing companies to partner with the British Army and will demonstrate the WarpSPEE3D machine’s ability to additively manufacture metal parts in the field.

The US Army’s Futures Command Project Convergence is a learning, experimentation, and demonstration campaign. From October 30 to November 9, 2022, in Fort Irwin, California, the project will evaluate approximately three-hundred technologies, focusing on advancing joint and multinational interoperability in future operational environments. Several thousand US, UK, and Australian service members, researchers, and industry partners will experiment with – and assess – these new advancements.

“We are thrilled to be invited by the British Army to collaborate and explore the capabilities and logistical impact of our Additive Manufacturing technology for the military,” stated Byron Kennedy, co-founder, and CEO of SPEE3D. “Our partnership over the last two years with them has validated the need for 3D metal printing to solve a myriad of challenges the military faces, and in rough terrain where they need a deployable and easy-to-use solution to print important parts quickly.”

“SPEE3D regularly works with defence worldwide to showcase their innovative Additive Manufacturing technologies to help solve some of the military’s most pressing supply chain issues,” said the British Army’s Lieutenant Colonel Davidson Reith. “It’s our pleasure to be able to work with SPEE3D, giving the British Army the opportunity to learn lessons from a world-leading Additive Manufacturing company.”

This collaboration follows SPEE3D’s recent activity which saw the company announce that WarpSPEE3D was reportedly the first-ever metal AM machine to successfully build parts on a US naval ship. The company also recently introduced the XSPEE3D – a containerised metal AM machine. 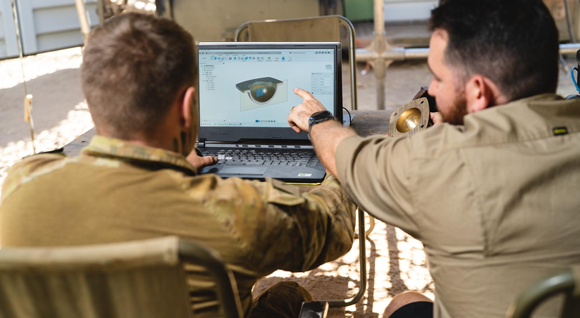