Seurat Technologies, Wilmington, Massachusetts, USA, has announced three Letters of Intent (LOI) from global manufacturers that link production volumes to revenue forecasts in applications such as tooling, energy and transportation in the industrial sector. Qualification for these programmes is now underway, with high-volume manufacturing targeted for 2023.

These LOIs – all of which represent 25 tons of metal AM parts – fill the manufacturing capacity of Seurat’s pilot facility and requires expansion into additional full-scale production factories. Seurat anticipates that its first production factory will be around 9,290 m2 and capable of manufacturing more than 500 tons of metal AM parts per year. It will be based in the Boston, Massachusetts, area and is expected to be powered by 100% green energy.

“Manufacturing must be closer to the customer. Having products produced in a faraway factory has clearly failed to be the best economic and environmental approach,” stated James DeMuth, co-founder and CEO of Seurat. “Our novel Area Printing process can scale to outcompete traditional manufacturing in every way: cost, quality, and volume, while also reducing our dependence on dirty fossil fuels. High volume orders of this magnitude are historic for the 3D metal printing industry and a tremendous step forward for the decarbonisation of manufacturing.”

The recent US Inflation Reduction Act and CHIPS and Science Act are said to mark a national movement to catalyse regional and economic growth while fighting climate change. Manufacturing is reported to be one of the largest emitters of greenhouse gas in the US – and this doesn’t account for the impact of global shipping.

Seurat has stated that its mission is to utilise clean energy for all its global factory deployments. Starting in 2025, Seurat sees potential to deploy factories with a renewable micro-grid to fuel its manufacturing. The company has validated its carbon footprint forecast according to ISO 14064 standards.

“Seurat’s factory deployment model enables contract manufacturing to happen closer to the customer which is highly attractive to the auto industry,” added Gero Corman, head of digital innovation for group production at Volkswagen AG. “Seurat’s 3D printing process has the potential to produce high-volume parts at cost-parity to overseas manufacturing, which will provide tremendous relief to supply chains.” 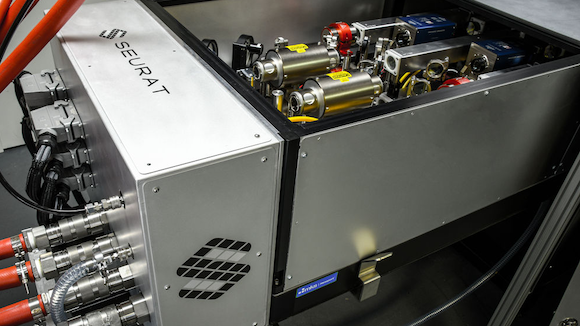