Markforged, Watertown, Massachusetts, USA, has announced it will become a publicly listed company through a merger with one, a special purpose acquisition company sponsored by A-star and founded and led by technology industry veteran Kevin Hartz. The merger is expected to be completed in summer 2021. Markforged will retain its name and will be listed on the New York Stock Exchange under the ticker symbol ‘MKFG’.

Founded in 2013, Markforged is reported to have products across 10,000 global facilities, with 170 patents issued or pending, a full suite of AM machines, widespread use of its Digital Forge platform and a history of some 10 million parts additively manufactured so far.

“When I co-founded Markforged, our mission was to reinvent manufacturing by driving innovation and creating products and technologies that have the potential to transform an entire industry,” stated Greg Mark, the company’s founder and chairman. “I’ve been thrilled that Markforged has thrived in its successful pursuit of these ambitions with a growing network of customers across major sectors and around the world. As we take Markforged to the next level, we have found the ideal partner in one. Kevin and his team recognise not only Markforged’s ability to transform the way businesses innovate, but also the brilliant, passionate employees that make this company so unique.”

Kevin Hartz commented, “Markforged has already reinvented the Additive Manufacturing industry and is well-positioned for robust growth benefiting from the velocity of digitisation. When launching one, our priority was to partner with a company with exceptional founders, visionaries and operators taking a differentiated approach in large and growing markets – Markforged ticked all of those boxes and more. We’re thrilled to be working closely with the entire Markforged team, comprised of highly engaged founders, visionary leaders and world-class engineers, uniquely positioned to lead a revolution in modern manufacturing.”

The combined company, upon closing, will have an approximate equity value of $2.1 billion, with over $425 million in gross proceeds to Markforged, assuming no redemptions by one shareholders. This includes $210 million PIPE at $10.00 per share from investors such as Baron Capital Group, funds and accounts managed by BlackRock, Miller Value Partners, Wasatch Global Investors and Wellington Management, as well as commitments from Microsoft’s Venture Fund M12 and Porsche Automobil Holding SE, existing Markforged shareholders. Net transactions proceeds will support the company’s continued growth across its key verticals and into new products, proprietary materials and expanded customer-use cases.

The transaction, already unanimously approved by the boards of directors of Markforged and one will be subject to approval by both companies’ stockholders and regulatory approvals, as well as other typical closing condition. Immediately after the combination is completed, current shareholders in Markforged are expected to hold 78% of the issued and outstanding shares of common.

Following the transaction’s completion, Shai Terem will continue in his role as Markforged president and CEO, and Kevin Hartz will join the board.

“Our mission and vision are to reinvent manufacturing by bringing the power and agility of connected software to the world of industrial manufacturing,” added Terem. “Today is a pivotal milestone as we progress towards making that vision a reality. We’ve been at the forefront of the Additive Manufacturing industry, and this transaction will enable us to build on our incredible momentum and provide capital and flexibility to grow our brand, accelerate product innovation and drive expanded adoption among customers across key verticals.”

“We’re focused on making manufacturing even better by capitalising on the huge opportunity ahead, and we are making this important leap through our new long-term partnership with Kevin Hartz and the entire team at one, a group of seasoned founders and operators with unparalleled experience. Their expertise and guidance will be invaluable as we continue to reinvent manufacturing today, so our customers can build anything they imagine tomorrow,” he concluded. 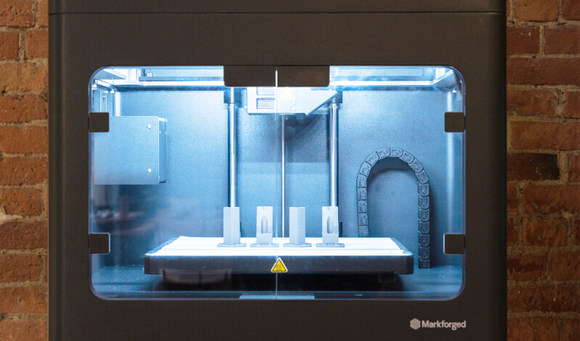