While the XB-1, as well as Boom Supersonic’s future Overture supersonic airliner, echo the shape of the earlier Concorde, the new demonstrator presented an opportunity to explore more advanced designs and manufacturing technologies than those available to Concorde engineers.

Knowing that additively manufactured parts were already used in many current aircrafts, the Boom Supersonic design and engineering team decided early on in the project that Additive Manufacturing would be used to produce some of the most complex part designs.

“There are many reasons for choosing that technology over others,” stated Byron Young, Boom Supersonic Engineer. “There’s a great deal of design flexibility in using 3D-printed materials. You might be able to achieve similar results by making multiple parts and welding or bolting them together, or by using complex carbon-fibre tools. But that requires a lot of engineering time, and often more manufacturing time as well.”

“Engineers are always trying to implement time-savings into a job,” he continued. “Much of the time and effort in aircraft design goes into joints, the interfaces between components. By designing directly for AM, we can reduce the number of parts and joints, which also reduces time and net effort. And part consolidation cuts out significant amounts of weight, something that’s a major priority in aircraft design.”

Many of Boom Supersonic’s AM parts are related to channelling air via complex vanes, ducts and louvres. Some of the air being routed through these parts exceeds 500℉ (260℃). The geometric complexity of these parts required a surface-based design approach.

Young added, “If fast-moving air is touching it, we care about that surface from an efficiency and performance standpoint. So when designing these parts, you generally start with aerodynamic profiles and then trim, fillet, and thicken surfaces to create the solid part itself. The resulting parts are very complex—which meant they definitely needed to be fabricated through AM.”

“The unique types of geometries they created for directing flow, with a focus on weight savings, couldn’t be done with sheet metal or casting or any other way. To reap the benefits of complex design and weight reduction together, the only option was to do it with metal AM.”

Having established a relationship with Velo3D on some trial parts in 2019, the Boom Supersonic team chose the company’s Laser Beam Powder Bed Fusion (PBF-LB) Sapphire machine to produce a number of additively manufactured titanium components (a right and a left version, for many of them) located in critical areas of the plane.

These included manifolds for the variable bypass valve (VBV) system that routes air released by the engine compressor to the aircraft’s outer mould line (OML); exit louvres for the environmental control system (ECS) that cools the cockpit and systems bay; louvres that direct the centre inlet’s secondary bleed flow to the OML; and NACA ducts and two diverter flange parts. NACA ducts are frequently used in high-speed aircraft to capture exterior air and channel it into the aircraft to cool the engine bays.

In almost every case, the Sapphire AM machine was able to build parts directly from Boom Supersonic’s CAD data, preserving original design intent. Miller added, “We did use our system’s Flow pre-print software to add some structural ribbing on the thinner walls of the NACA ducts that had to be constrained. But for the most part, the other components all printed as is, with no compromise to the design.”

Young was impressed with the ability of the Sapphire machine to accurately produce the extremely thin-walled designs of the parts. He stated, “The Sapphire system allowed us to print walls as thin as 20 thou (0.02 inch, or 750 µ), with a surface finish that didn’t require additional machining in most cases.”

The high aspect ratio (height to width) made possible by the machine’s non-contact recoater system was said to be an additional benefit. In order to remove mass, the vanes on the centre inlet’s bleed louvres were additively manufactured hollow, and the parts were designed with high aspect ratios (very thin walls along long spans).

Miller further added, “Because our technology provides the ability to print that very high aspect ratio in this kind of design, we didn’t need excess material for strength inside the structures and we could grow those duct vanes up very high without any interference from the recoater.”

The challenge of working with titanium

All parties involved in the project agreed that one of the biggest challenges was working with the titanium material Boom Supersonic had chosen for the AM parts.

“One of the positive aspects of using titanium is the material allowables at temperature,” stated Aaron Miller, DMP Additive Manufacturing Engineer Aaron Miller. “There’s less loss of strength at high temperatures compared to aluminium or carbon fibre, and it has a higher strength to weight ratio.”

But lightweight, extremely heat-resistant titanium, widely used throughout the aerospace industry for critical components, also has a reputation for being delicate and difficult to work with no matter how it is manufactured. If cooled too rapidly, titanium becomes brittle and is prone to cracking. Miller joked, “Titanium is on that list of things that machinists don’t like, right behind engineers and Inconel.”

Titanium parts can be manufactured conventionally via casting, which has a slower cooling rate to prevent cracking, notes Gene Miller. But the extremely thin walls in the aircraft hardware designs would have been nearly impossible to cast. “That’s really one of the driving forces behind using 3D printing for these parts because we can print large, thin-walled titanium sections without the high scrap rate of cracked cast parts.”

“This was a learning process on all sides,” Gene Miller continued. “Boom designed a part family that was new to us, really pushing the envelopes for weight reduction and thin-wall geometries, and we had a lot to learn as far as printing these components out of titanium and what to expect from the physics of printing. How it is going to move? How is it going to shift? What can be printed without supports and what areas needed to be supported so the result is nominal?”

This is where process control is critical. Velo3D’s semiconductor heritage provides an intense focus on quality control. The team has developed a unique, proprietary AM process that optimises the build parameters and sequences to produce robust titanium parts.

Gene Miller added, “This reduces the amount of internal stress in the substrate as the material is being built up in the Z build-direction. It diminishes the possibility of cracking by mitigation of internal stresses formed during cooling.”

Quality control was integrated throughout the entire build, starting with Flow pre-print software, executed through the Sapphire system and validated with Assure’s quality assurance. Pre-build machine calibration was achieved with a single click, automatically checking critical variables like laser alignment, beam stability, powder bed quality, and more. In-process metrology monitors a wide variety of key metrics and flags these anomalies. Comprehensive build reports for all parts were compiled and saved for future reference.

Once Boom Supersonic’s titanium parts were additively manufactured, they were removed from the build plate with sawing or wire-cutting EDM. The DMP machinists found post-processing to be relatively straightforward, compared to parts made in other AM machines they had worked with, explains Aaron Miller.

He reported, “After cutting off the build plate we had very little to do in the way of post-machining apart from minimal support removal. You don’t have any tiny supports in small crevices or hard-to-reach places because the SupportFree technology eliminates the need for those.”

“The parts come out of the Sapphire system almost finished, just needing a little handwork with a screwdriver or grinder,” Aaron Miller continued. “We also ream out pilot holes (on larger parts to be joined together) with a mill to ensure they’re the correct size. It’s part-dependent, but probably just a half-hour of machining per part, which is not a big deal.”

The part geometries brought an additional challenge when creating fixtures for holding the parts during finishing. Aaron Miller added, “There’s pretty much no surface that’s perfectly flat or round on an aircraft, which makes them difficult to grab on to. But we just used the parts’ CAD models and quickly designed and 3D printed custom plastic fixtures (on a separate FDM printer) that were appropriately squared or rounded for us to grab on to with our finishing tools.”

Part finish right out of the machine was tested with a profilometer, registering about 250 RA on average. “If the customer wanted to go to 125 RA it would take just a few minutes with a vapour hone to achieve that,” Aaron Miller added. “So far Boom hasn’t asked us to dial-up the surface finish on their parts; they’re concentrating on geometry and part strength at this point, but if a smoother surface is needed that’s easy to accomplish.”

Finished parts were heat treated and/or Hot Isostatic Press (HIP) processed to enhance fatigue life. “Doing this is always a good idea, especially when you have flight components that may be cyclically loaded during takeoff and landing,” noted Gene Miller. “Supersonic flight introduces a number of different phenomena and stresses you generally don’t see with conventional air travel.”

Young further stated, “The main forces being applied aren’t generally pressure loads from, say, breaking the sound barrier. In many cases, it’s induced strain caused by the overall structure of the aircraft flexing around your part.”

“When parts with dissimilar thermal expansion coefficients are mounted to each other, significant stresses can also result (this includes carbon composites and aluminium in addition to titanium). Designing these 3D printed parts to be very thin and flexible can actually mitigate some of these issues,” Young concluded.

The success of a collaborative approach

It has to be noted that the collaboration of the three companies enabled the project’s success in producing the additively manufactured parts for the XB-1 supersonic demonstrator. The Boom Supersonic team states that it found Additive Manufacturing more complex than they had envisioned, but that it could deliver on their original design intent. Additionally, DMP has expanded its AM expertise significantly, going on to purchase a third Sapphire AM machine.

Supersonic air travel is on the horizon for Boom Supersonic

Commercial flights for Overture, Boom Supersonic’s future Super Sonic Transport (SST), are scheduled to begin before the end of the decade. Hundreds of potential routes have reportedly been identified, and Virgin Group and Japan Airlines are said to have already pre-ordered thirty airliners.

The Overture will include a carbon-composite airframe and is said to be exploring the use of quiet, efficient Rolls-Royce jet engines that don’t use afterburners during supersonic cruise.

Boom Supersonic’s XB-1, the one-third scale demonstrator for Overture, is anticipated to start flight testing in 2021, with the full-sized Overture’s debut anticipated to be 2025. 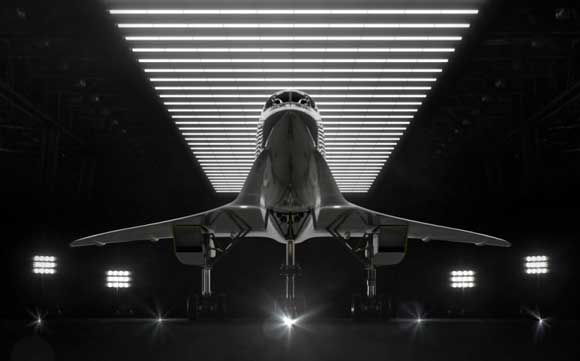