Wayland Additive, Huddersfield, UK, has announced the sale and installation of its Calibur3 metal Additive Manufacturing machine at the Hilda B. Hewlett Centre for Innovation, part of No 71 Inspection and Repair Squadron, located at RAF Wittering in Cambridgeshire.

The Calibur3 was launched in 2021 and uses Electron Beam Powder Bed Fusion (PBF-EB) Additive Manufacturing, which Wayland refers to as its NeuBeam® technology process. The Hilda B Hewlett Centre for Innovation is said to mark the Royal Air Force’s first steps into advanced component manufacturing. Introduced by No 71 (IR) Squadron, AM is a new capability for the RAF and it is hoped that the technology will provide a breakthrough in the RAF’s ability to design and produce its own aircraft spares on demand.

“The sale of our technology to the RAF is exciting for all involved,” stated Will Richardson, CEO at Wayland Additive. “The Calibur3 has been developed to overcome common problems with metal AM, and uses the NeuBeam process which delivers on all of the advantages of metal electron beam (eBeam) Powder Bed Fusion (PBF) technology, while overcoming the troublesome issues that have traditionally limited wider adoption. The Wayland team comprises decades of experience with eBeam research, development, and implementation in the semi-conductor industry. This has allowed them to address and solve the charging issues that have, until now, restricted [PBF-EB] processes with the fully neutralised NeuBeam process.”

“The RAF could one day use metal AM to design and produce its own aircraft spares on demand, which plays perfectly to the characteristics of our technology,” Richardson continued. “We offer the ability to process a wider palette of metal materials allowing the production of lighter and stronger parts often used in aerospace applications as well as highly wear-resistant parts. For the RAF, spare parts can be produced using the Calibur3 system in days not months — negating issues related to logistically challenging supply chains — at much lower cost, and without the need to stock an array of off-the-shelf spare parts.”

In addition to Wayland’s Calibur3 AM machine system, the Hilda B Hewlett Centre also has a Nikon XT H 450 scanner, a RenAM 500 metal AM machine from Renishaw and a Stratasys Fortus 450 polymer AM machine.

Squadron Leader Allen Auchterlonie, Officer Commanding No 71 (IR) Squadron commented, “One day the Royal Air Force will be able to manufacture structural aircraft components on main operating bases, or even in deployed locations. We’ll be able to save money, but more importantly, we won’t have to wait for spares to be delivered and we can get aircraft repaired far more quickly. The opening of this facility is a landmark in this exciting journey.”

71 (IR) Squadron is based at RAF Wittering and is part of the A4 Force. Group Captain Nick Huntley commander of the A4 Force Elements added, “Additive Manufacturing offers us enormous potential to repair and modify our aircraft quicker than ever before. Introducing any new capability into the RAF is a serious undertaking and the team at 71 Squadron has gone about this with professionalism and almost obsessive diligence. This is a genuine milestone; a real achievement and I am proud that this project has been led by the A4 Force.” 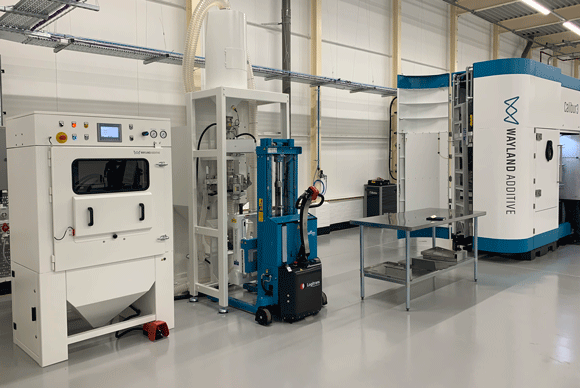