The Devens’ facility, VulcanOne, is powered by a fleet of VulcanForms’ proprietary 100-kilowatt class Laser Beam Powder Bed Fusion (PBF-LB) Additive Manufacturing machines, each featuring 150 gantry-mounted lasers, which will total over 2 megawatts of laser capacity between them. The Newburyport facility focuses on automated precision machining and assembly operations. In merging these technologies digitally, VulcanForms believes that it offers groundbreaking, US-based digital manufacturing infrastructure to its customers.

According to VulcanForms, manufacturers perform nearly 60% of US private sector R&D, and every dollar spent on manufacturing contributes an additional $2.79 to the US economy; this is said to be a higher multiple than that of any other industry. However, manufacturing employment in the US has dropped over 40% since 1980, while wages and capital investment have been largely stagnant. Partially, this has been due to offshoring, displacing critical manufacturing know-how and infrastructure to other countries.

“By scaling advanced digital manufacturing, we can create a new era of U.S. innovation and economic growth,” explained Martin C Feldmann, VulcanForms co-founder, president & CEO. “We’ve recognised a game-changing opportunity when additive manufacturing technology is scaled for industrial production and is seamlessly integrated with automated machining and robotics. VulcanForms has built the physical infrastructure and digital workflows to deliver this full-stack manufacturing solution at unprecedented speed, precision, quality, and scale.”

Founded in 2015, VulcanForms’ current customers include leading companies in the aviation, space, defence, medical, semiconductor, and other critical industries. For instance, the company supplies over a dozen US Department of Defense (DoD) programmes, including the F35 Joint Strike Fighter and Patriot Air Defense System, has delivered thousands of components for the semiconductor industry, and is enabling innovation in medical implants.

By combining its technology, a data- and simulation-based digital thread, with operational excellence, VulcanForms’ integrated approach allows its customers to innovate faster and produce more without the need to make major capital investments and implement new manufacturing technologies from scratch.

“VulcanForms brings forth metal Additive Manufacturing as a scalable industrial process, and as a cornerstone of breakthrough digital production systems,” stated John Hart, VulcanForms’ co-founder, also a Professor of Mechanical Engineering at MIT. “Integrated digital production facilities are critical infrastructure which will accelerate domestic and global innovation and draw top talent to the manufacturing sector.”

The VulcanOne facility in Devens combines VulcanForms’ proprietary AM technology with a digital thread, spanning advanced simulation, in-process sensing, and machine learning algorithms said to ensure the highest level of quality and precision.

In addition to its fleet of PBF-LB machines, the facility incorporates facilities for heat treatment, precision machining, assembly and inspection. To this end, the company has expanded its capabilities through the acquisition of Arwood Machine Corporation in Newburyport, Massachusetts. The end-to-end workflow enabled by these facilities and acquisitions is said to enable VulcanForms to deliver engineered components and assemblies, designing and operating a digital-first process chain tailored to each of its customers’ needs.

Greg Reichow, Partner at Eclipse Ventures and Director of VulcanForms, stated, “There is a fundamental shift in the ways manufacturers need to adapt to global supply chain challenges and the increasing demands for product design flexibility. VulcanForms’ full-stack approach to deliver an engineered solution, combining advanced additive and subtractive technologies merged through a digital thread will revitalise US manufacturing and hardware innovation. The technologies that enable this agile workflow will dramatically impact the way products are imagined, designed, built, and delivered for decades to come.” 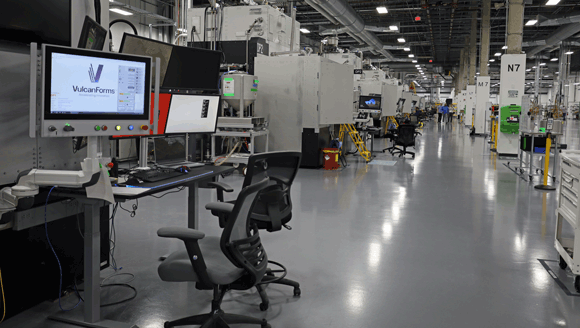