The trauma and orthopaedic team at St George’s Hospital, Stafford, UK, recently implanted a metal additively manufactured bone cage in order to save a patient’s limb after he had sustained an open fracture to his right tibia and fibula (the two bones that make up the lower leg).

Russell Neighbour, aged sixty, is the first patient to have had the procedure at St George’s. Neighbour sustained the fracture after a fall from a ladder in December 2018, in which his “right tibia and fibula came out through the back of [his] leg and buried themselves in the grass.”

After undergoing two operations to repair the fracture, it failed to heal and Alex Trompeter, Consultant Orthopaedic Trauma and Limb Reconstruction Surgeon, recommended a custom metal additively manufactured bone graft as the solution that would give Russell the best chance of walking again. The alternatives were further surgery or an amputation.

Bone grafting is a procedure that uses transplanted bone, or an implant, to replace damaged bone. It is typically carried out for patients with complex fractures that fail to heal properly. Trompeter, who led the multidisciplinary team undertaking the operation this year, believes St George’s is one of the few centres in the UK to have performed a custom metal additively manufactured bone graft.

Describing the procedure, Trompeter explained, “We removed the bottom six centimetres of Mr Neighbour’s shin bone where the fracture hadn’t healed, and we replaced it with a custom made 3D metal cage.”

According to a number of media outlets, the new technique has now been used in more than thirty UK patients on the National Health Service (NHS). First, the patient undergoes CT scans to produce a 3D image of what their bone looks like. The surgeon can then work out how much bone needs to be removed – and the metal cage that will fill the gap is designed on a computer.

Three cages are produced based on the resulting design using metal AM, each a slightly different size so that the surgeon can ensure the one used is a perfect fit. A few months later, patients undergo the first operation to remove the damaged bone. A temporary spacer, made of a glass-like material in the same shape as the cage, is put in the gap left behind – to hold its shape.

Four to six weeks later, the surgeon carries out a second operation, where the temporary bone is removed and the cage inserted and fixed in place using internal screws and rods.

Bone is taken from another part of the patient’s body and placed inside the cage. This contains healthy bone cells that will help stimulate the growth of new bone in and around the cage. After three months, the leg should be strong enough for patients to stand, and even walk unaided.

“The cage is made of porous metal to allow new bone to grow through and is exactly the same shape as the piece of bone we cut away,” he continued. “The benefit of personalised implants is that they start performing their functions quickly and help to speed up recovery post-surgery.”

“Just a few days after surgery, it is fantastic to see that Russell is already bearing his full weight and walking comfortably again for the first time in over a year,” Trompeter added shortly after the operation. 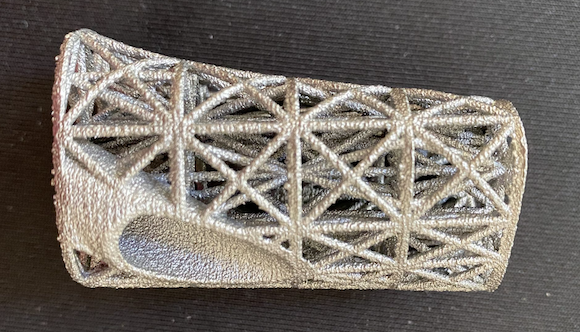