SPEE3D, Melbourne, Australia, has been working with the Australian Army to test and validate metal Additive Manufacturing as a military capability. The latest field trial is reported to be the longest and toughest yet, taking place in the remote Northern Territory, alongside planning and field training exercise Koolendong.

The Australian Army announced a $1.24 million investment in a pilot of SPEE3D technology in February 2020, with a twelve-month trial of the WarpSPEE3D Tactical AM machine. The trial was designed to test the feasibility of deploying metal AM as a capability both in barracks and in the field.

A number of field trials in 2020 resulted in over fifty case studies of additively manufactured parts and demonstrated that the WarpSPEE3D AM machine was robust enough to operate in remote Australian bushland. The programme was extended in 2021 to verify initial results.

This year, SPEE3D has been working closely with the Army to train the first military Additive Manufacturing Cell (AMC) technicians who specialise in the production of additively manufactured metal parts, from design to build, machining, heat treatment and certification. In the remote bushland of Bradshaw Training Area, in the Northern Territory, the AMC and SPEE3D tested the WarpSPEE3D Tactical AM machine as part of its toughest trial yet. The machine was transported over 600 kilometres (373 miles) from base – over rough terrain – to operate in hot, dusty conditions for three weeks.

Over the three-week trial, the team plans to produce metal parts for the M113 armoured personnel carrier, a vehicle that has been used by the Australian Army for over forty years. The aim of this year’s trial is to prove metal AM can produce high-quality, military-grade parts that can be validated and certified for use in the field. The success of this trial will demonstrate that Additive Manufacturing plays an important part in the future of defence readiness.

As the program continues, the AMC hopes to explore more components that can be repaired and replaced using metal AM, and assess how this technology may eventually fit into Australian Army infrastructure. 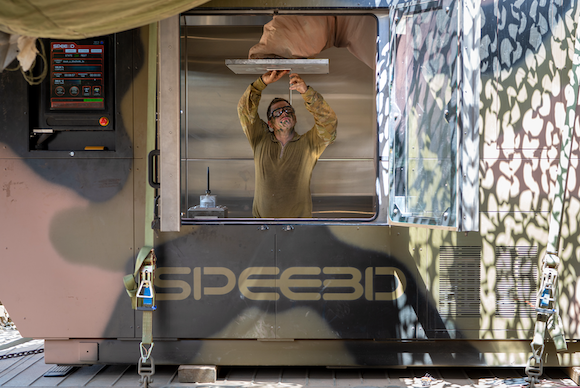