Rocket Factory Augsburg and the German Aerospace Center (DLR) announced that the RFA will build and operate its own test stand at DLR’s site in Lampoldshausen, Germany. From there, RFA will test its Helix engine, starting in mid-2023, in an effort to bring the EU’s first stage-combustion engine to serial production maturity. The RFA will use Additive Manufacturing to realise this serialisation goal.

According to this agreement, RFA will lease and use the P2.4 test site. While DLR provides the basic infrastructure and regulations, the RFA brings its own test stand and supporting infrastructure. Overall, investments in the single-digit million range are planned. This will give RFA the opportunity to test and operate its Helix engine in Germany for the first time.

Until now, test stands in Lampoldshausen were only used by DLR, ESA and ArianeGroup; RFA is one of the first ‘new space’ companies to be given this opportunity. So far, testing of the Helix engine has only been carried out in Esrange, Sweden, at the Swedish Space Cooperation (SSC). Operations at this site will continue.

“Less than a week before the ESA Ministerial Council, this collaboration is a clear RFA location commitment to Germany and sends a strong signal to policy makers and the industry,” stated Jörn Spurmann, Chief Commercial Officer at RFA. “The setup created with DLR is commercially very competitive on a worldwide scale and the right way to ensure the competitiveness of the German space industry in Europe and the world. We are very proud to be able to test our Helix staged combustion engine – the first in the European Union – at DLR in Lampoldshausen and are honored by the trust placed in us as a New Space company.”

The opportunity to test in Germany not only simplifies logistics, but also bureaucracy, as approval procedures are known and export & import efforts are eliminated. It also deepens cooperation between DLR and RFA.

“Start-ups are becoming increasingly important players in space, as well. That’s why we are delighted with the trust that Rocket Factory Augsburg has placed in us as a new space company. We also see this cooperation as an acknowledgement of the capabilities of the existing test infrastructure and as an investment in the future,” added Anke Kaysser-Pyzalla, chair of the DLR Executive Board. “By validating promising advanced engine concepts, we are jointly laying the foundations of Europe’s commercial and cost-effective access to space.”

In the middle of 2022, RFA fired its Helix engine for the first time for 74 seconds. A short initial test of four seconds was followed by two long-term tests of 30 and 40 seconds. The same Helix engine was ignited and shut down three times without the need to replace any components. This allows the Integrated System Test (IST), in which a complete upper-stage tank with a Helix engine is tested as a closed system for the duration of its flight. 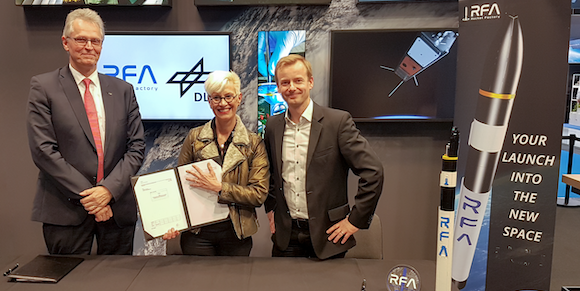