Researchers from the Chinese Academy of Sciences and its associated university have published a paper in Energy Storage Materials on the Additive Manufacturing of lithium metal batteries with ultra-high areal energy density, produced via the manipulation of their porosity.

Revolutions in Li-ion battery technology, spurred on by their growth, but the application of these advances can be prevented by factors like Li dendrite growth, low Coulombic efficiency and mismatched cathodes. In “All 3D printing lithium metal batteries with hierarchically and conductively porous skeleton for ultrahigh areal energy density”, the researchers additively manufactured conductive Ti3C2Tx MXene scaffolds with porous LiFePO4 lattices to construct batteries with prolonged lifespans and higher energy density.

The exceptional ability of Ti3C2Tx to form a stable structure with lithium regulates the uniform deposition of metallic Li, allowing the stable MXene scaffold to achieve an areal capacity of 30 mAh/cm2 at 30 mA/cm2 and a cycle lifespan of 4800 h. The full battery is assembled by rationally matching this dendrite-free MXene-based Li anode with a hierarchically conductive LiFePO4 framework at an ultrahigh mass loading of 171 mg/cm2.

The as-assembled Li metal batteries are said to deliver unprecedented areal capacity of 25.3 mAh/cm2, a reportedly record-high areal energy density of 81.6 mWh/cm2 and improved cycling stability of 500 cycles, breaking through the limitation of thick-film cathodes. The researchers believe that this outlines a viable option for the stable additive manufacturing of Li metal batteries.

The paper is available here. 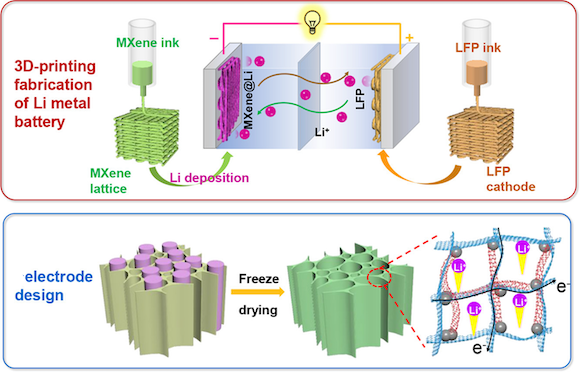