According to Relativity, its latest Stargate AM machine technology defies conventional AM constraints by moving horizontally as it feeds multiple wires into a single build head to additively manufacture orbital rockets. The company is developing customised software and machine learning techniques to allow these AM machines to produce more complex and significantly larger metal products, with improved build speed and reliability. Stargate 4th Generation AM machines are also stated to simplify manufacturing supply chains, as they are capable of additively manufacturing a rocket with 100 times fewer parts in a matter of months.

The Stargate 4th Generation AM machines will serve as the primary manufacturing infrastructure for Terran R production. In the longer term, Stargate 4th Generation AM machines offer the potential for other end-product use cases within the aerospace, aviation, energy, and defence industries. To date, Relativity has secured five customers across $1.2 billion in customer contracts for Terran R, including a multi-launch agreement with OneWeb and a commercial mission to Mars with Impulse Space.

The Stargate 4th Generation AM machine technology is said to include the following benefits:

“Large-scale products that are designed to fly will inevitably be 3D printed,” stated Tim Ellis, cofounder and CEO of Relativity Space. “The lighter a product is, the better it performs, and when 3D printing that product, it’s also faster and more cost-effective to produce with each successive improvement. The compounding rate of progress is high, and we are still in the early days of what printing can achieve.”

“We see 3D printing as an automation technology that has the power to change the pace of innovation in manufacturing, which is why we’ve invested in building our own proprietary tech stack from day one,” Ellis commented. “Stargate printers are designed to unlock rapid iteration, which opens up opportunities for innovation in large-scale manufacturing products. What would take traditional aerospace and space manufacturers years to develop and build, will be reduced down to months due to a highly adaptable, scalable, and automated process, made possible through software-driven manufacturing.”

Scott Van Vliet, SVP of Software Engineering, said, “Iteration empowers innovation not only in our rocket design, but also in our own Stargate printers. In its short history, Relativity has made great strides in evolving its core 3D printing technology, but Stargate 4th Generation printers are our most innovative leap yet. We’re fundamentally changing the way our factories are designed and operating, and by flipping the script and going horizontal, we’re radically increasing our capacity for scale. Being a software-driven manufacturing company allows us to achieve unique product features, such as integrated pad-ups and domes, with radical flexibility.”

The majority of Terran R components will be additively manufactured inside Relativity’s new headquarters in Long Beach, named The Wormhole. Aeon R engines, for Terran R, will continue to be produced at the company’s other Long Beach factory, The Portal. The Wormhole, a former Boeing C-17 manufacturing plant, was secured by Relativity to be its new headquarters in 2021.

Currently 33% operational, the factory has several Stargate 4th Generation AM machines online with more than a dozen AM machines planned to be producing Terran R components in the coming months. At the full capacity forecasted run rate, each Stargate 4th Generation AM machine is capable of producing 4 Terran R rockets per year. The remainder of The Wormhole will continue to be built out in phases, bringing more printers online and moving more teams into the company’s headquarters as production for Terran R scales. 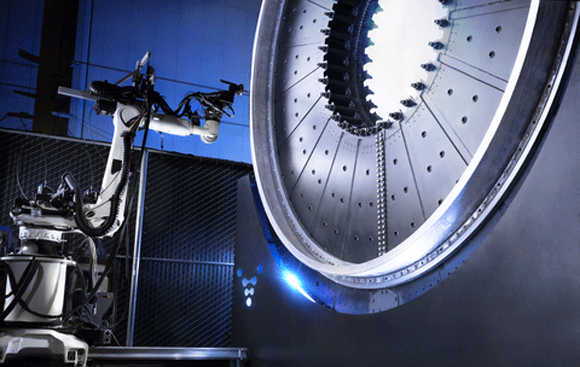