Aerojet Rocketdyne, Los Angeles, California, USA, reports that four Aerojet Rocketdyne RS-25 engines were scheduled to be hot-fired in unison for the first time on January 17, as part of NASA’s Space Launch System (SLS) Green Run test series. The engines will power the SLS rocket as the US prepares to establish a sustainable presence on the Moon to prepare for missions to Mars.

The 493-second hot-fire test will mirror the engines’ thrust profile in flight and is said to be the main event of the SLS Core Stage Green Run test series that has been underway since January 2020.

“The Core Stage Green Run includes several first-time events for the world’s largest rocket stage, including the first firing of all four RS-25 engines together,” stated Eileen P Drake, Aerojet Rocketdyne CEO and president. “Our RS-25 team has been working hand-in-hand with NASA and core stage manufacturer Boeing to ensure SLS is ready for liftoff.”

All four RS-25 engines that are part of the Core Stage Green Run originally flew on the Space Shuttle and are being reused for SLS. The engines have already been utilised in missions: flying the Space Shuttle to dock with the Russian Mir Space Station, returning U.S. Senator and former Mercury astronaut John Glenn to space, constructing the International Space Station, and carrying astronauts to service the Hubble Space Telescope.

Aerojet Rocketdyne explains that once the hot-fire is complete, the SLS core stage will be inspected, refurbished and prepared for flight at NASA’s Stennis Space Center prior to delivery to NASA’s Kennedy Space Center (KSC). Once at KSC, the core stage will be integrated with the solid rocket boosters and the Orion spacecraft in preparation for the Artemis I launch, which is scheduled for 2021. 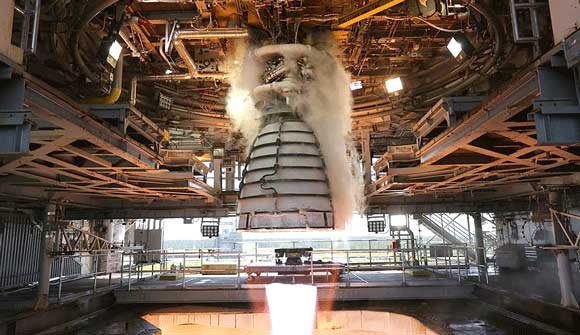