Global provider of technologies for the measurement and analysis of advanced manufacturing processes, MKS Instruments, Andover, Massachusetts, USA, has announced the SP504S Beam Profiling Camera under its Ophir® brand.

Designed to measure large and divergent beams, the SP504S camera captures and analyses wavelengths from 340-1,100 nm for beam sizes from 45 µm up to 23 x 23 mm. It features a dynamic range of 44.6 dB, the lowest measurable signal of 0.25 W/cm2 and reputed high accuracy at NIR wavelengths. The camera incorporates what the company has stated is the industry’s smallest pixel size of 4.5 µm, which allows measurement of laser beams with higher spatial resolution and smaller beam sizes. That makes the camera suitable for large beam diameter applications that require high resolution or when beam tracking is needed over a large area, such as laser material processing, VCSEL/LEDs, and medical aesthetics.

“Increasingly, laser manufacturers need to find small features in a large divergent beam area, like semiconductor fabrication,” stated Reuven Silverman, General Manager, Ophir Photonics. “The SP504S camera can capture and accurately analyse such beams with widths up to 23 mm. Prior to this, large beams often had to be reduced with optics so the beam would not overfill the camera imaging sensor. But there is always a concern that any optic in the path of the beam may cause spatial changes that are not characteristic of the natural beam. The large imaging array and high resolution of the SP504S camera does away with the need to downsize beams for measurement.” 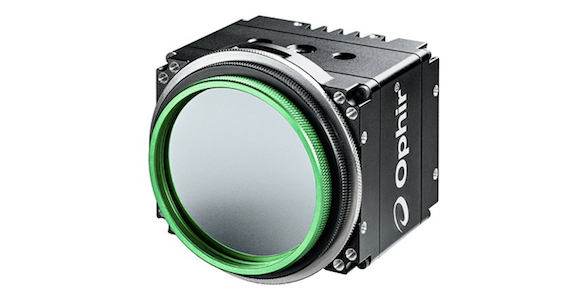