Markforged, Watertown, Massachusetts, USA, has commenced trading today on the New York Stock Exchange following the company’s previously announced merger with one, a special purpose acquisition company sponsored by A-star and founded and led by Kevin Hartz. Markforged common stock will trade under the ticker symbol ‘MKFG’ and ‘MKFG.WS‘ for Markforged warrants.

As part of the merger, the existing management team, led by Shai Terem, Markforged president and CEO, will continue to operate the business. Kevin Hartz and Carol Meyers, venture partner at Glasswing Ventures, LLC, will join Markforged’s Board of Directors. Alan Masarek, most recently CEO of Vonage, will join the board as chairman.

In order to mark the occasion, Markforged additively manufactured its own version of the bell that has been rung to open each day’s trading at the New York Stock Exchange since the 1870s. Created using Markforged technology, the bell is comprised of materials including 17-4 stainless steel, onyx reinforced with carbon fibre, copper and more.

“Today is a proud moment for the entire Markforged team and a significant milestone in our mission to reinvent manufacturing today so our customers can build anything they imagine tomorrow,” stated Terem. “As a publicly traded company, we will continue to focus on executing our ambitious product roadmap and further accelerating innovation, expanding customer adoption, and capitalising on the strong secular trends in Additive Manufacturing, allowing us to bring our platform to even more manufacturing floors around the world for mission-critical use cases. Looking ahead, we have some exciting products in our pipeline as we move from accessible end-use parts to robust production. I couldn’t be more excited about our talented team and the opportunities in this next chapter.”

Hartz commented, “Being a publicly traded company will enable Markforged to build new relationships as a critical partner to even more leading global manufacturers, leveraging its expanded platform and proceeds from the transaction to accelerate its impact and growth. I am excited to join the board of directors and to work alongside a group of talented and diverse directors. I look forward to contributing to the team as Markforged continues to scale and this nascent industry matures and transforms modern manufacturing in the coming years.” 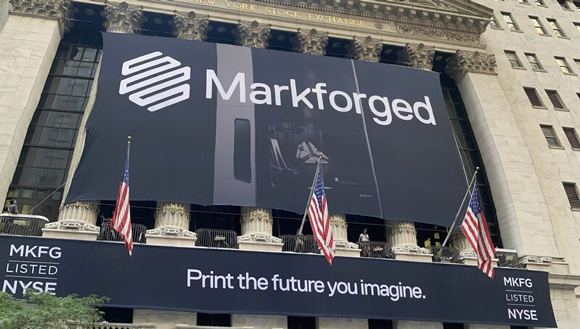