Mantle uses its proprietary TrueShape technology – a hybrid material extrusion (MEX), CNC and sinter-based process – in the production of high-precision components for prototype and production tools, moulds, and dies. Using Additive Manufacturing for tooling production dramatically cuts the time and cost of producing these parts.

In the reported collaborations, Mantle additively manufactured tool components with its H13 flowable metal paste, with the resulting parts said to have shown equivalent performance to conventional H13 tool steel.

Earlier this year, Mantle teamed up with Westminster Tool, Plainfield, Connecticut, USA, to help them make tooling inserts (core and cavity) so they could quickly mould medical forceps sample parts.

According to Westminster Tool’s Manufacturing Engineer, Eddie Graff, a traditional aluminium prototype tool would present difficulties in moulding PA11. However, working with Mantle Graff was able to design the tool inserts to include conformal cooling channels, thus better controlling the cavity temperature. The inserts were additively manufactured in just eighty-six hours.

“In the end, it took us three weeks to go from design to FOT, quality medical parts on a prototype tool,” Graff stated. “It’s incredible.”

Mantle’s metal additively manufactured inserts held a tolerance of +/- 0.038 mm. Because they were made with H13 steel, they allowed Westminster to add a subgate so that the company could mould thousands of parts without the risk of gate erosion.

Another recent collaboration with Wepco Plastics, Middlefield, Connecticut, USA, sought to evaluate Mantle’s technology when moulding a cellphone stand, representative of the consumer market, in which surface finish is often critical to quality.

Processing setup was said to be swift, and moulding the parts in both blue and black ABS plastic produced smooth surface finishes without the time required for polished aluminium, according to Amanda Wiriya, Manufacturing Support Director at Wepco. She also reported that Wepco’s machine operators were impressed with how easily parts came off the tool.

“We’ve had issues in the past demoulding parts from 3D printed plastic inserts,” she stated. “This was a totally different experience.”

While Mantle’s TrueShape technology can produce accurate tools, the results may still require welding and/or machining to address engineering changes or reconditioning over a tool’s life cycle. A third project sought to verify that Mantle’s H13 material could undergo these processes without any change to existing machining and welding processes.

“We wanted to replicate a real-world environment for mould components, one we see as a service provider in the industry,” Natale stated. “This would enable us to test how Mantle’s inserts held up to engineering changes or worn parting lines that require welding. We also wanted to test how easy it would be to machine the insert to tighten up tolerances.”

Contestabile performed CNC machining to add a notch and ground three of the four sides. Natale stated that there was no evidence of pitting and that the material showed no signs of wheel loading or heat generation using conventional grinding methods. PLT welded the notch to simulate adding material for an engineering change or building up a worn parting line in a muold. The material accepted the filler wire readily, and Contestabile post-ground the bar again.

Natale stated that the end results were indistinguishable from traditional H13 tool steel. He concluded, “It was a seamless experience, and didn’t disrupt any of the processes in our shop. There were no requirements for special tooling or alterations to the process because of the material. Performance was consistent with conventional H13.” 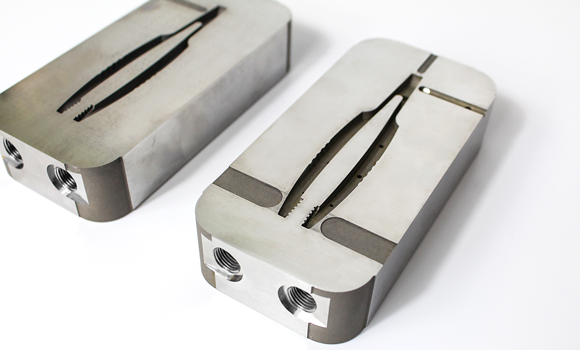