Launcher, headquartered in Hawthorne, California, USA, reports that the latest test on its additively manufactured E-2 rocket engine for the US Space Force has been successful. The company states that the test demonstrated the highest performance of a kerosene rocket engine turbopump ever manufactured in the US. This follows Launcher’s successful test fire earlier this year.

The E-2 is a closed-cycle, additively manufactured, high-performance liquid rocket engine in development to power the Launcher Light launch vehicle to orbit with a single engine in its first stage. The successful E-2 turbopump tests took place in late September 2022 at NASA Stennis Space Center. The E-2 test team achieved or exceeded all power, input and output pressure, efficiency, and vibration goals over the course of eleven tests, including long duration, cavitation, and boosted flow.

The pump assembly used Kerosene (RP-1) and liquid oxygen (LOX) as working fluids. The power for the turbine in this test campaign was high-pressure gaseous nitrogen. This test was approved by the U.S. Space Force as part of Launcher’s Tactical Funding Increase (TACFI) contract.

Under the U.S. Space Force’s TACFI contract, Launcher’s next step in E-2 engine development will be pre-burner component testing which is scheduled to begin in November 2022, followed by a long-duration test of the integrated E-2 engine (thrust chamber and turbopump in a closed-cycle) in Q1 2023.

“We would like to thank the US Space Force and NASA for their support of innovation and for making Launcher’s latest high-performance records possible,” commented Launcher CEO Max Haot. “By achieving our turbopump milestone, Launcher is one step closer to realising its mission to expand space access.” 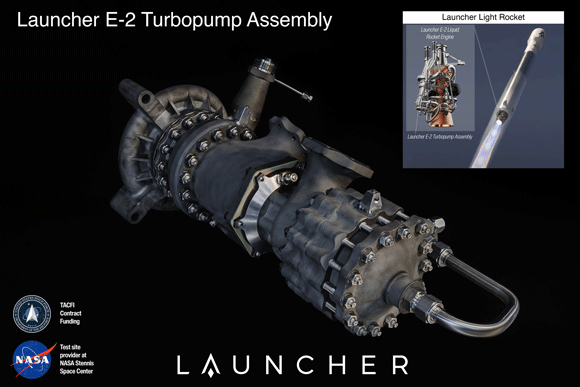