Doosan Heavy Industries & Construction, Changwon, South Korea, has increased its metal Additive Manufacturing capacity following the opening of a new AM fabrication shop at its Changwon headquarters. The new facility, reported to be the largest of its kind in Korea, will enable the company to widen its reach in numerous sectors including power generation, aviation and defense industries.

Doosan Heavy first adopted AM in 2014 to obtain a more advanced method of manufacturing gas turbines for power plants. The company recently added a further two metal AM machines, and now has a total of five, including a large-scale Powder Bed Fusion (PBF) machine capable of manufacturing parts with a maximum size of 800 mm x 400 mm x 500 mm.

“Backed by our engineering, materials and manufacturing expertise, Doosan Heavy Industries & Construction has grown to become the only company in Korea to hold the capability for developing on its own a 3D printing process for various types of metal,” stated Yongjin Song, CSO of Doosan Heavy Industries & Construction. “We plan to create synergy by applying our 3D printing technology to many more fields – not just the manufacturing of power plant components, but also in the development of parts for industries like the aviation and defence sectors.”

The company states that it is now supplying additively manufactured parts to a wider group of customers in various sectors, such as large gas turbines for power plants and prototype parts for the Korean KF-21 fighter jet. Doosan Heavy also recently signed an MoU with the KICET to cooperate on the Additive Manufacturing of gas turbine materials technology. 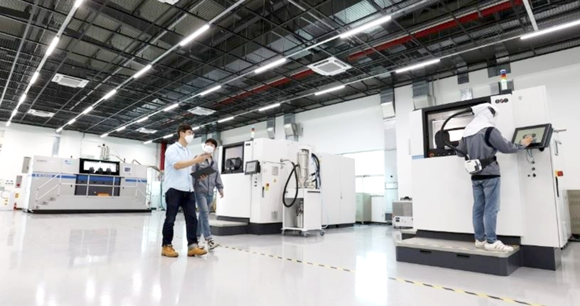