Digital Metal states that this high productivity is matched by a robust platform, custom software and a fast powder change magazine.

“As a team we have previously gone from a single machine to a production machine and now we’ve launched a true production platform. We´re moving away from the rest of the binder jet market towards tighter tolerances, higher volumes and higher precision,” stated Digital Metal CEO, Christian Lönne.

“We´re heading towards a higher level of maturity. We do not just offer a machine in isolation. We have a true platform optimised to work in concert with debinding, sintering and post processing equipment. This platform is modular, extensible and a stepping stone for Industrialisation,” added Lönne.

Built on Siemens MindSphere cloud IoT OS, the software system ensures that future IoT integration and connections will be reliable and secure. The system is said to be intuitive and easy to use, and optimised for production environments. New support structure minimisation increases productivity and reduces part cost. Higher powder utilisation means that now 100% of excess powder can now be recycled, states Digital Metal, with this environmental gain also reducing part costs.

Azoth 3D, a precision Additive Manufacturing parts maker based in Ann Arbor, Michigan, was announced as the launch customer for the new DMP/PRO.

“Digital Metal´s new machine speed, while keeping quality and reliability, is compelling. The PRO Series reduces the capital needed to scale and also reduces part costs through higher machine throughput. We want to run it round the clock, seven days a week, making thousands of parts daily. Azoth 3D wants to be the largest and best independent binder jet manufacturing company and this is the system we need to get us there,” stated Azoth’s General Manager, Cody Cochran. 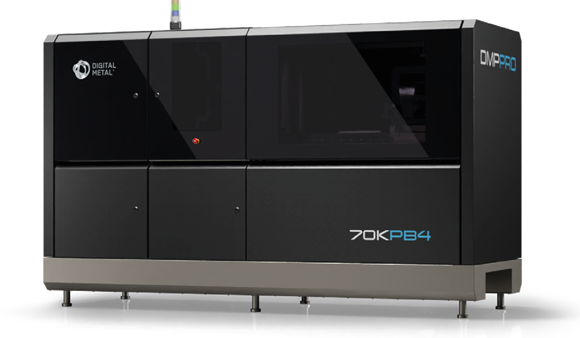