Blackstone Resources AG, Baar, Switzerland, recently hosted a press day to mark the official launch of its additively manufactured batteries. The company presented its lithium iron phosphate (LFP) cells, announced in February, in detail during the event. Using cathode material from IBU-Tec in Weimar, the LFP cells are now being produced in Döbeln, Switzerland, using Blackstone Thick Layer Technology®, a proprietary AM process about which little detail has been made public.

The use of AM to produce these batteries is said to offer numerous advantages compared to conventional methods, allowing the production of thicker energy-storing layers in the battery cells, said to increase the gravimetric energy density by 20%.

“In front of an assembled press and a large number of viewers in the online stream, we have now demonstrated: our patented 3D printing technology for the production of climate-friendly, sustainable and particularly powerful lithium battery cells is ready for series production!” stated Ulrich Ernst, CEO and founder of Blackstone Resources.

Blackstone battery cells are adaptable in size and can be precisely tailored for a wide variety of customer needs, such as those of automotive companies. The space saving offered by the batteries is reported to be 15%, the material saving 20 euros/kWh, and energy consumption in production is reduced by 23%.

“At the same time, the process relies on an environmentally friendly, purely water-based process and reduces waste materials by 50%. In this way, we are making an important and sustainable contribution to the transport transition and in the fight against climate change,” explained Ernst.

The company’s plant in Döbeln, Germany, which produces the batteries, is expected to employ thirty-eight people by the end of 2021.

Blackstone’s plant will initially produce LFP and nickel, manganese and cobalt (NMC) cells, but the technology will be applicable to all cell chemistries. In the future, it also expects to additively manufacture solid-state batteries, as with solid-state technology, the energy density of a cell can be increased by up to 70%.

Talks are also underway with battery specialist LioVolt, Limbach-Oberfrohna, Germany, for the joint production of a bipolar battery. These are lithium-ion batteries that are reportedly lighter, cost less, charge faster, and last longer than traditional batteries. 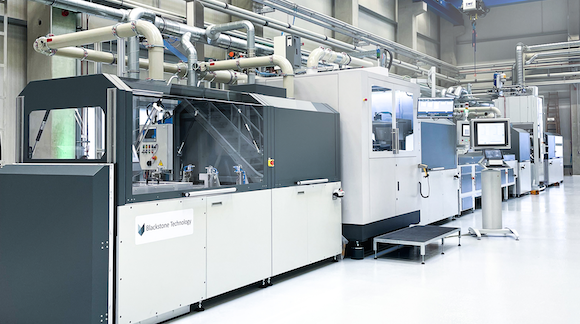