During the Additive Manufacturing Users Group (AMUG) 2021 annual conference, Terry Hoppe and Vince Anewenter were presented with the President’s Award. In the three decades since the organisation’s inception, only ten individuals have been recipients of this award.

Terry Hoppe, Stratasys’ director of North American applications team until his retirement in 2015, received the award posthumously; Hoppe succumbed to pancreatic cancer in December 2020. The award was accepted on his behalf by Scott Crump, co-founder of Stratasys.

In his remarks, Crump recounted stories that captured Hoppe’s contributions as the first Stratasys employee and his twenty-five years of valuable work with the company. Crump also shared personal memories of Hoppe that described his approachable, likeable personality that drew people to him.

“His character and embrace of everyone in Additive Manufacturing is an excellent example of what our President’s Award embodies,” stated Carl Dekker, AMUG president.

AMUG’s President Award was presented primarily to recognise Hoppe’s role in transitioning AMUG from a supplier-specific users group to one that embraces Additive Manufacturing users of all technologies, in particular, as well as his overall contributions to the AM industry.

Gary Rabinovitz, AMUG chairperson, was vice president and president during the transition years. He commented, “The future of AMUG was far from certain at that time, and sponsor support was minimal. Yet, we needed support from Additive Manufacturing companies representing a range of technologies to make the reinvented AMUG Conference work. And that is when Terry Hoppe’s contributions were pivotal.”

“The AMUG Conference is unique in that it is a forum for information exchange, but potential sponsors were evaluating it for its lead generation potential,” Rabinovitz continued. “We invited Terry as a guest of our event so that he could experience what we were trying to do. From that exposure, he became a believer and advocate. Terry took that conviction back to Stratasys and championed the AMUG way. He was effective; Stratasys became a foundational sponsor and has remained a strong supporter over the past nine years.”

Dekker stated, “The addition of Stratasys to the users group supported our ability to grow membership to include users of all industrial systems. Terry’s selfless efforts to facilitate our growth continue to expand the impact we all have with Additive Manufacturing technologies.”

The other President’s Award recipient, Vince Anewenter of Milwaukee School of Engineering, has served as AMUG treasurer for nine years. Through his financial stewardship, AMUG realised ten-fold growth in conference attendance while maintaining the organisation’s financial health. Anewenter’s skills and dedication were said to be critical to the successful navigation of the pandemic-induced impact on conferences and events, which proved him to be a more than deserving award recipient.

“Because of COVID-19, we postponed our 2020 event and then moved the 2021 conference to a new location,” stated Rabinovitz. “With each change came numerous financial transactions, negotiations and problem resolutions. Vince got us through all of that and kept AMUG in a healthy financial position.”

According to Rabinovitz, Anewenter began his first year as treasurer with a box containing paperwork and a laptop which had to be deciphered before building the financial systems and fiscal policies that guide the organisation.

“Starting with very little, Vince has guided and managed AMUG operations through transitions, growth, and challenges. And he has done that collaboratively – as part of the team – where he listens to others and works hard to satisfy divergent goals. When it comes to finances, there is no one I trust more than Vince to make the correct decision to benefit AMUG’s longevity. He works proactively, not reactively,” Rabinovitz added.

“It was Vince’s work before and during the pandemic that made that possible,” he concluded. “Losing one conference and operating another at half capacity was a major challenge, financially. But with Vince’s diligence, we weathered the storm and emerged financially secure.” 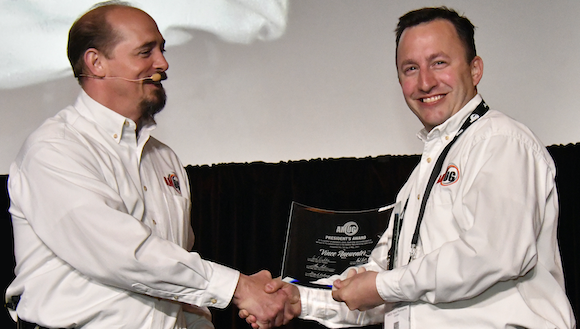