As processes, EHLA and PBF-LB mainly differ in powder supply mechanisms and places of laser energy input. In Laser Beam Powder Bed Fusion, the powder is applied globally in one layer and the laser spot is focused on this surface. In Extreme High-Speed Laser Material Deposition Process, the powder is applied locally via a nozzle and the powder focus is slightly above the deposition surface (approx. 1 mm); this means individual alloys can be conveyed and separately mixed in-situ before deposition.

Despite being the most utilised Additive Manufacturing technology, researchers worried that the potential of PBF-LB wasn’t exploited to its fullest because of the time- and material-consuming alloy development process. In an effort to speed up this process, Aachen researchers identified and investigated the relevant EHLA and PBF-LB process parameters that influence cooling rates and resultant microstructures. After this, they applied their theories to X30Mn22, a high-manganese steel. As the final step in this process, the microstructures of either sample were compared to review the process transferability.

Taking the laser power and laser spot diameter (Ø spot) into account, it was shown that the intensity in PBF-LB is almost 1fourteen times higher than in EHLA; the interaction time between material and laser beam in PBF-LB and EHLA, however, differ by an approximate factor of ten. For this reason, it is assumed that the effects of the different laser intensities are effectively balanced out, thus leading to a similar energy input per particles.

Another value that was investigated was energy volume density (Ev) which can be used to compare the process characteristics of laser power, scanning speed and powder mass flow rate with regard to thermal balance. The calculated Ev for PBF-LB is about 2.3 times greater than the Ev for EHLA. However, the calculated Ev for PBF-LB only corresponds to a molten material quantity of a single layer thickness. Since the actual depth of molten material in the PBF-LB process is double or treble the layer thickness, the Ev must be accordingly increased. For this reason, the researchers assume that the heat balance is similar in both processes.

Further investigations on the different melt pool characteristics geometry and size show that the EHLA melt pool geometry measures a 25 times larger area than the geometry of PBF-LB’s melt pool. Additionally, the melt pool shapes differ; EHLA’s is rather flat compared to the PBF-LB melt pool. This is mainly due to the form of energy input of the two processes into the material and the heat dissipation from the melt pool into the substrate or the layers below.

The researchers found that the microstructure of the manufactured samples is dendritic in both processes and the obtained dendrite arm spacings (DAS) are similar and can further be aligned by adapting process parameters such as process speed in EHLA. Therefore, it can be assumed that the resulting microstructures and mechanical properties are comparable for EHLA and PBF-LB.

Further investigations are expected to compare the chemical compositions of the manufactured samples obtained by the two processes. EHLA process parameters like particle velocity and powder mass flow will also be examined with regard to their influence on the resulting samples’ chemical properties. In addition, due to the difference in energy input, the evaporation behaviour of various alloys will be investigated and compared.

In summation, with regard to microstructural properties, the researchers have stated that these early results indicate that EHLA is suitable as an advanced alloy screening and development tool for PBF-LB. 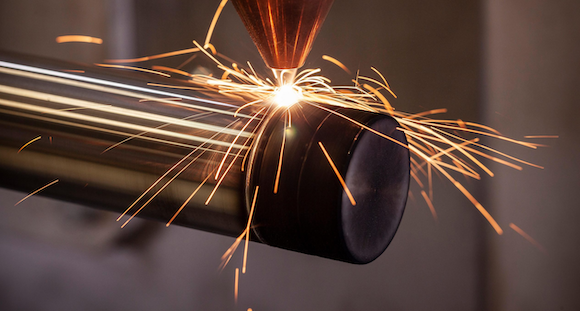