Marinus Kolbinger, Specialist AM Pre-Development and Planning, BMW, began with an overview of BMW’s Additive Manufacturing production network. This, he explained, has progressed from initial polymer-based machines in the 1990s through to laser-based metal AM machines in 2005 and Binder Jetting (BJT) machines in 2018.

Across BMW’s AM production network, over 300,000 components are additively manufactured each year. However, Kolbinger added, for an increase in the applications and use of AM in the automotive sector, it is seen as a priority to reduce the overall costs of the AM production process.

Here, Evan Butler-Jones, VP Product and Strategy, Equispheres, explained that cost savings can be made by increasing production speeds – but this needs to be achieved without sacrificing part performance. Key to this is increasing process stability, he stated, because powder variability can result in unwanted process impacts and can lead to inconsistencies.

Highly spherical powders of uniform size, and increased flowability of around two and half times that of alternative powders, also improve design capabilities and can result in lighter, stronger, more consistent parts.

Kolbinger confirmed that BMW’s calculations show that powder from Equispheres, used with the developed parameter set, can achieve a cost saving of around 12%. “We also saw that the process was significantly more stable,” he stated. 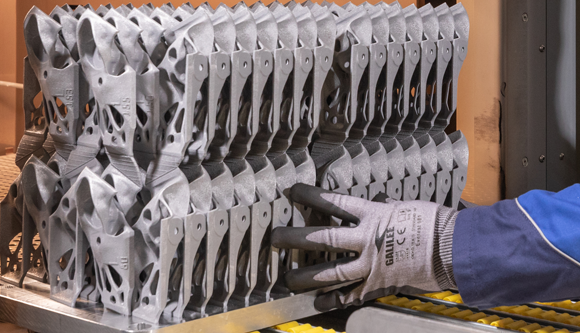