GE has initiated testing on the first T901-GE-900, GE’s next-generation rotorcraft engine that is intended to power the US Army’s UH-60 Black Hawk, AH-64 Apache and Future Attack Reconnaissance Aircraft (FARA) aircraft in the future.

GE’s use of advanced materials, including additively manufactured parts and ceramic matrix composites, are key technologies enabling the T901’s performance. As previously reported, the use of metal Additive Manufacturing in the T901 engine has enabled the consolidation of parts, which resulted in approximately 20% weight reduction.

In 2019, GE’s T901 engine was selected by the US Army for the Engineering and Manufacturing Development (EMD) phase of the Improved Turbine Engine (ITE) programme to re-engine its Apache and Black Hawk fleets. The US Army also selected the 3,000-shaft horsepower T901 for the Future Attack Reconnaissance Aircraft (FARA) programme.

The first engine to test milestone is being performed in a recently upgraded test cell at GE’s Lynn, Massachusetts, facility. GE has upgraded three test cells in at this facility to efficiently complete the comprehensive T901 EMD engine test programme. The test cell upgrades include systems to absorb the increased power and allow no-load operation of the engine, improved instrumentation capability, and upgraded test controls. T901 EMD engine testing will also be performed at GE’s Evendale, Ohio, facility, as well as government facilities.

“We’re excited to get testing started on this engine,” stated Tom Champion, Program Director, GE T901. “It’s the biggest milestone to date in the ITE programme, and the result of the strong collaboration between the GE and US Army teams. The early testing data we’ve gathered indicates the engine is performing in line with our expectations and Army requirements.”

Testing of the first engine is the start of a multi-year test campaign to reach full Army qualification. During the remainder of testing for the first engine, the integrated test team will perform a number of simulated flight conditions to collect performance data of the highly instrumented test engine. 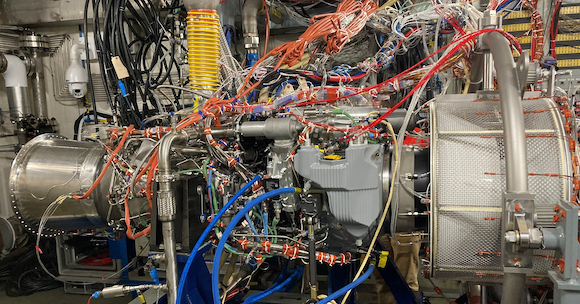