The EW2C process, in which a component or structure is built up with a laser by joining metallic materials layer by layer, is reportedly in contrast to classical laser beam Directed Energy Deposition (DED), the material is not continuously fed into the process as a wire. Instead, the wire first is pushed in the form of spirals to the desired locations on the shaft and then welded there with a high-power laser. Since the wire spirals are placed under tension on the shaft, they cannot slip during the laser process.

Fraunhofer IPT states that as transmitters of power and torque, shafts are inconspicuous yet irreplaceable components of cars, aircraft, ships or wind turbines. Billions of these components are reportedly produced worldwide every year in various sizes, most of them with shoulders or other surface features. The institute explains that the EW2C process is an alternative to common ablative processes of shaft machining such as turning, an alternative that not only conserves resources but also lowers costs.

“Our idea was to change the shaft production more than just cosmetically,” stated Robin Day, Head of the Directed Energy Manufacturing department at the Fraunhofer IPT. “We wanted to develop a powerful process that would make producing complex shafts more cost-effective and resource-efficient.”

The team of Fraunhofer IPT researchers who conducted the investigations are said to be optimistic with their developments. They explain that the tension of the wire spirals improves process stability by a factor of ten compared to conventional wire-based laser beam Directed Energy Deposition, since unwanted movements of the wire during the welding process are prevented.

The researchers were also able to prove that the EW2C process is well suited for the deposition of thick layers. In a single layer, they were able to apply between 0.5 and 2 mm of material, depending on the thickness of the wire. They found that their process can keep up with the cycle times of turning. In the test series, the process was able to weld a 25 mm high spiral of Inconel 718 with a wire diameter of 1.2 mm onto a steel shaft with an outside diameter of 35 mm in less than 60 seconds.

Several millimetres of material could be reportedly quickly applied when the steps were repeated and different combinations of materials are said to be possible such that the part surface can be technically functionalised and geometrical shapes generated.

In order to improve the new process – for which a patent has already been filed – Day’s team is working on further optimising process stability and automating the process. Various devices for automated placement of the wire spirals on the shafts are already reportedly being tested.

Day added, “To increase the process speed even further, we are experimenting with enlarging the focal spot geometry and thus irradiating and melting several spiral coils simultaneously.”

In addition, highly complex volume elements will also be applied to shafts in the future by combining different spiral lengths and other wire materials. To this end, the researchers are testing the suitability of the process for both solid shafts and thin-walled hollow shafts and tubes.

Fraunhofer IPT explains that using integrated sensor technology in the existing machine environment at the institute, it is also recording various additional data during the process and processing them using artificial intelligence. This data will form the basis for modelling and actively controlling EW2C for different materials and process parameters.

“With concepts like EW2C it is possible to trigger greater innovations in industries that have developed evolutionary, but not revolutionary, for decades. Additive Manufacturing unlocks great potential, especially in the metal sector. We have only just begun to break new ground,” concluded Day. 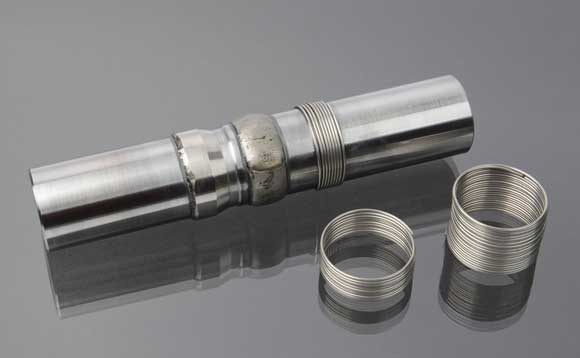