Racing bike specialist Pinarello, headquartered in Villorba, Italy, has introduced the Bolide F HR 3D, which the company states is the “first and fastest high-performance 3D printed bike”. The Bolide F HR 3D features an additively manufactured Scalmalloy frame, built on an EOS M400 AM machine. The bike was designed in collaboration with professional cyclist Filippo Ganna and the Ineos Grenadier’s team for Ganna’s UCI Hour Record attempt. Ganna went on to break the UCI Hour Record with the bike, covering a distance of 56,792 kilometres.

The new frame has been designed to reduce the frontal area as much as possible, taking advantage of the removal of the 3:1 UCI rule (this stipulated that tube depth couldn’t exceed its threefold width). Gains are also said to have been made by narrowing the wheel hubs and the bottom bracket (BB). The BB was narrowed down to 54 mm (from 70 mm), the wheel hubs from 120 mm down to 89 mm on the rear and from 100 mm to 69 mm on the front.

Pinarello constructed the Bolide F HR 3D according to Ganna’s anatomy to maximise rider comfort and aero performance. Serrations were also added to the seat tube and post to increase the bike’s aerodynamics.

“The combined drag of the seat tube and seat post is almost 40% of the total drag of the frame and fork. By studying how humpback whales can do very tight manoeuvres in the oceans, researchers have found that the tubercles (the protrusions in the front of their flippers) contribute significantly to this ability,” the company noted on its site. “Working on this shape applied to [bicycles], they have also found that ridges can minimise and reduce drag by generating streamwise vortices in the troughs between the bumps, causing the flow behind the peaks to stay attached.”

Fausto Pinarello, commented, “We are always pushing the level of product design to new extremes to allow our champions to achieve their goals.” 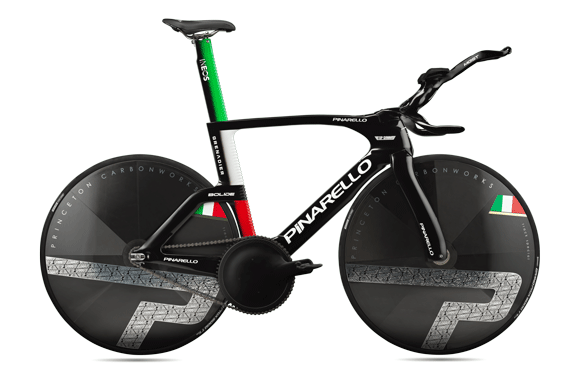