The ExOne Company, North Huntingdon, Pennsylvania, USA, has released details of its InnoventPro concept, said to be the most advanced entry-level model for metal Binder Jetting. The InnoventPro will be deployed with ExOne’s NanoFuse binders, a new range of inkjet-printable nanoparticle suspensions.

According to the company, the InnoventPro will be a major upgrade of the Innovent+, which ExOne released in 2016. It will offer two new build sizes, a three litre and a five litre version, with build speeds topping 700 cm3/hour.

The new AM machine is said to be aimed at academics, researchers, and a full spectrum of manufacturers, from machine and MIM shops to high-volume producers, who want to produce metal parts quickly, affordably and sustainably.

“Customers around the world already love the Innovent+, and based on their feedback, we’re going to give them an updated entry-level system that’s bigger, faster and smarter than ever,” stated John Hartner, ExOne CEO.

The recirculating print head reportedly also enables ExOne to offer particulate binders as an option on a commercial Binder Jetting system. According to the company, its research team has been additively manufacturing a variety of nanoparticles suspended in its binders for years.

A new class of NanoFuse binders

The all-new class of NanoFuse binders, first patented in 2018 with related patents pending globally, is said to advance the field of binder jet Additive Manufacturing in critical ways. The company explains that, because nanoparticles fill in the interstices between powder bed particles and can bond at lower temperatures, they enable stronger green parts.

In turn, this enables the Additive Manufacturing of larger parts and finer features, delivering sharper corners and edges. These new binders are said to also improve the resolution and sinterability of high-demand metals, such as copper and aluminium.

He added, “Our patented approach to 3D printing particulate inks in a print bed is opening new doors in Binder Jetting.”

ExOne’s patented Triple ACT is a critical advanced compaction technology that, depending on the material, delivers final part density of 97+%, dimensional tolerances in the range of  <1%-2.5%, and high consistency, with part variation of just 0.3% across the print bed.

The company explains that Triple ACT has been so effective that it has also sped up ExOne’s qualification of new materials. ExOne binder jet systems now process more than twenty metal, ceramic and composite materials, with single-alloy metals making up more than half of those offerings. NanoFuse binders are expected to expand that material range and improve sintering dynamics. 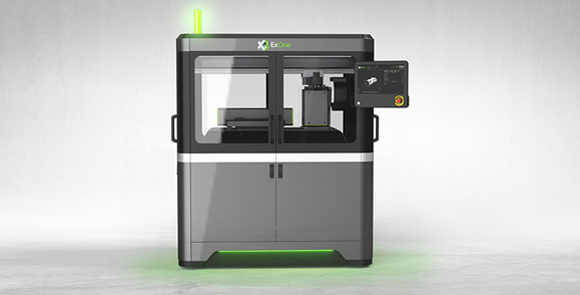