Since 2016, Bastion Cycles has been producing road bicycles and adopted the use of Additive Manufacturing in bicycle production to provide high-performance custom bicycles. The company transitioned from outsourcing their AM needs by investing in Renishaw’s AM250 system in late 2018, gaining in-house production titanium AM capabilities.

The company explains that it has been planning to create the system for several years, citing the ability to tune the fork offset for further optimised handling for each rider and further improved front end ride quality through controlled flex and damping characteristics as the main motivation for the development. However, clients increasingly requested for the hoses and wiring to be hidden for aesthetic purposes.

Ben Schultz, Managing Director, Bastion, stated, “When we are designing a custom bike for someone, fork offset and head tube angle are two of the most important variables in getting the bike to handle the way we would like and the customer expects. Especially on smaller frames, the limits on the fork offset can inhibit achieving this optimised handling condition while maintaining toe clearance. Now we can use whatever fork offset we need between 40 and 55 mm, depending on the design.”

“To date, we have made use of aftermarket carbon fibre forks and bar-stems and we have felt there is a small, but noticeable, disconnect in the ride quality between the front and rear of the bike,” Schultz continued. “The new cockpit and the addition of our breakthrough technology to the fork and bar-stem extends the same beautifully refined and smooth ride quality to the front of the bike, matching the rear. The icing on the cake, so to speak, has been the ability to hide all the hoses and wiring which is something customers are increasingly asking for as it creates a much cleaner aesthetic and also delivers a small aerodynamic advantage.”

Unlike many similar products on the market, Bastion’s system utilises a more traditional 2.86 cm (1 1/8 in) upper headset bearing resulting in a more svelte and refined aesthetic and enabling the company to maintain the existing styling of its bikes.

James Woolcock, Engineering Director, Bastion, commented, “Even though most systems on the market use a larger 1.25” [3.18 cm] upper headset bearing we felt this was too much of a compromise on the visual weight at the top of the bike and not something we wanted to accept. Although extremely challenging from a technical perspective, we are glad we persisted and the evidence is in the beauty of the end product.”

To facilitate the internal routing, a D-shaped fork steerer tube has been used, but unlike other D-shaped steerer systems, the matching bore in the stem is also D-shaped. This assists routing of the hoses and wiring, but also means any loss of steering control in the event of a loose stem bolt is virtually impossible.

Throughout the system, a combination of additively manufactured titanium alloy (Ti6Al4V) and carbon fibre is employed. However, unlike the tubing in their frames (which is filament wound), Bastion has created a new process using hard tooling and pre-impregnated carbon fibre to manufacture the legs and steerer of the fork, and crossbar of the bar-stem. The company has not specified the details of its process but states that the quality of the product is something the company were focused on from the very beginning.

Bastion has been working closely throughout the development with Raoul Luescher from Luescher Teknik, a specialist in Quality Control and Non Destructive Testing (NDT) and Inspection of carbon fibre components with a background in the aerospace industry. In what is said to be an industry first, the products will undergo Statistical Quality Control (SQC) involving Ultrasonic testing of 100% of the parts initially before reducing the number of parts scanned depending on the statistical variation found in the testing.

Raoul Luescher, the owner of Luescher Teknik, added, “This has been something that I have been vocal about for many years having witnessed fork failures that have resulted in serious injury and death. Non Destructive Inspection and Quality Assurance methods such as ultrasound have been utilised in the aerospace industry on critical carbon composite parts for over forty years. A bicycle fork is a failure critical item that deserves the same attention to detail and quality assurance processes not only in the design phase but in ongoing production. I am proud to work with the Bastion team on this fork and believe it is a significant step forward in bicycle industry quality.”

According to Bastion, in light of recent high profile failures of integrated cockpit and fork systems, it is worthy of note that the Bastion system uses a bonded in titanium compression plug which significantly reduces the possibility of damaging the steerer through over-tightening and also removes any risk of galvanic corrosion.

Likewise, with the bars, the drops sections are titanium and have been tested to double the recommended torque on the shifter clamp bolts with no signs of damage to the bars. Whilst not reporting any specific numbers the company has identified there is a definite aerodynamic advantage through the NACA foil shapes of the legs of the fork and the crossbar of the bar-stem. As well as the increased aerodynamic efficiency from having the hoses and wires out of the free stream.

“We really tried to balance adding some aerodynamic benefits with the overall aesthetics and are extremely happy with where it has ended up. We definitely feel it achieves that optimal condition of satisfying both form and function,” concluded Woolcock. 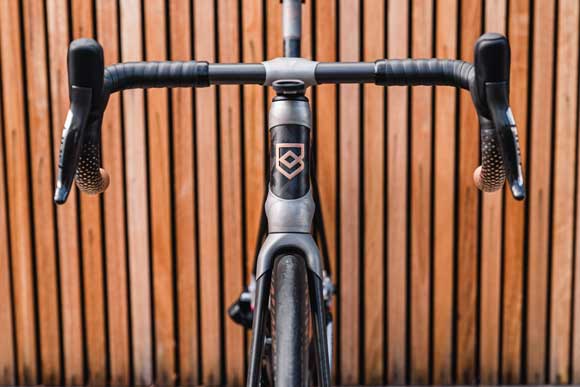