Eplus3D, Hangzhou, China, reports that it has recently worked on the development of an exhaust system for a Ford Mustang, customising and optimising its performance though the use of metal Additive Manufacturing.

Having been contacted by a car modification company, Eplus3D looked at how AM could be used to customise exhaust components – not only to improve performance, but to adjust the sound that the exhaust system makes. The objective was to be able to make these adjustments lawfully while offering the car enthusiast an alternative to the stock exhaust option.

The exhaust components where evaluated by Eplus3D, and, in the early stage of the project, Eplus3D’s designers produced a customised 3D model using the Rhino design software. The internal structure of the exhaust pipe was optimised and designed for the AM process, increasing the operation efficiency and reducing its size.

After completing the design, Eplus3D produced a polymer AM model of the exhaust pipe using to test the gas flow and visually communicate the design to the customer, enabling further product improvement where needed.

The final design was said to offer a more pleasing, supercar-like sound (as requested by the customer), and reduced the weight of the system by around 67%. The optimised gas flow helped alleviate issues with power loss, often found when exhaust systems are unable to output the exhaust gas effectively at higher speeds.

Once the design was confirmed, Eplus3D used a number of its nationwide AM service centers to simultaneously build multiple components on its EP-M260 AM machines, thus shortening the time of delivery. The part is reported to be currently under trial on the Ford Mustang. 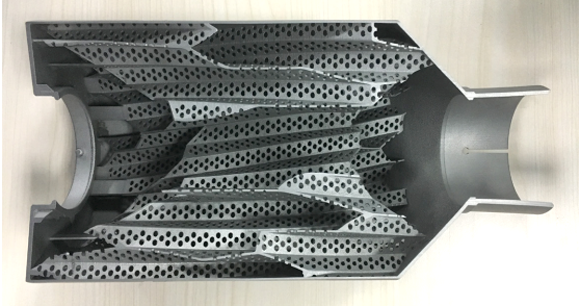