Relativity Space has announced a major expansion of its operations in Long Beach, California, USA, with the signing of a new, 90,000+ m2 (1,000,000+ ft2) headquarters and factory at Goodman Commerce Center, Long Beach.

The new headquarters is said to be one of the largest in the private space industry and will have capacity for 2,000+ employees, a metallurgical laboratory, Laser Beam Powder Bed Fusion (PBF-LB) machines, a mission control centre, and dozens of the company’s proprietary Stargate Directed Energy Deposition (DED) metal Additive Manufacturing machines, described as autonomous, scalable and ‘the largest metal 3D printers in the world.’ With software changes, Relativity’s Stargate machines are capable of building both Terran 1, an entirely metal additively manufactured launch vehicle, and its fully reusable, entirely additively manufactured rocket, Terran R.

The announcement follows the closing of Relativity Space’s $650 million Series E funding round. With this major expansion, Relativity states that it is doubling down on its ‘Factory of the Future’, which is centred on the Stargate metal AM machine. According to the company, its Factory of the Future fuses metal AM, artificial intelligence, and autonomous robotics, offering a radically simplified supply chain that enables the company to build its rockets with 100x fewer parts than comparable space vehicles in less than sixty days.

By using automation, Relativity’s Factory of the Future was able to stay operational during the peak of the COVID-19 pandemic, keeping the company on track for the launch of the Terran 1 later this year. Incorporating AI-driven controls, Relativity’s Stargate machines are said to continuously optimise production, resulting in exponentially compounded quality and time improvements, lower costs, and product designs not possible in traditional aerospace manufacturing.

“Relativity is at the forefront of an inevitable shift to software-driven manufacturing, and the opportunity to reimagine this facility for the future of aerospace is incredibly exciting,” stated Tim Ellis, the company’s CEO and co-founder. “Securing this space for Relativity Headquarters, which is now one of the largest facilities in private space, right here in Long Beach, is key for scaling out our Terran R programme while also continuing to tap into the unparalleled talent here to join us on our mission.” 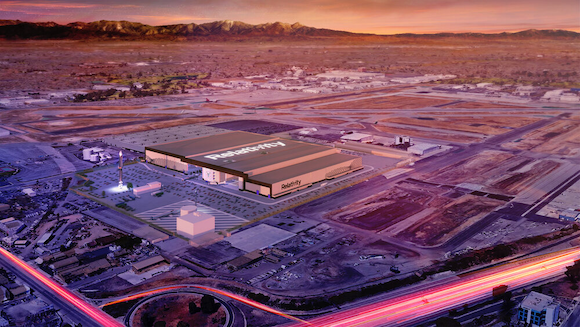