MX3D, Amsterdam, the Netherlands, has unveiled what is reported to be the world’s first stainless steel additively manufactured bridge in the city centre of Amsterdam. The bridge, which measures 12.2 m in length, 6.3 m in width and 2.1 m in height, was placed over one of Amsterdam’s oldest canals and was officially opened by Queen Máxima of the Netherlands.

Designed by Joris Laarman Lab, with engineering company Arup as lead engineer, the installation of the bridge is the culmination of several years of work. MX3D began this project in 2015 when it proposed producing a metal bridge with the company’s large-scale, robotic Wire Arc Additive Manufacturing (WAAM) technology.

Funded by the Lloyd’s Register Foundation, the project was a collaborative effort by a range of industry leaders including ABB, Air Liquide, ArcelorMittal, Autodesk, AMS Institute and Lenovo, all contributing in order for MX3D to realise its goal.

The production of the bridge began between 2017–2018 with four robots additively manufacturing the structure using more than 6,000 kg of stainless steel. MX3D’s WAAM technology uses ‘off the shelf’ welding robots to build up metal objects layer by layer. The bridge design was created using generative design and topology optimisation techniques with the combination of these technologies enabling greater freedom of design and significant material reduction.

The company explains that the bridge also serves as a laboratory, as it is equipped with a sensor network and contributed to a research project. The City of Amsterdam will use the bridge’s data streams to explore the role of IoT systems in the environment. For example, using such systems to analyse crowd behaviour, in order to help better understand the impact of tourism in the Red Light District.

MX3D collaborated with The Alan Turing Institute, Arup, Autodesk, FORCE Technology, and the University of Twente in order to create and install the sensor network in the ‘Smart Bridge.’ The bridge’s sensors collect structural measurements such as strain, rotation, load, displacement, and vibration, and also measure environmental factors such as air quality and temperature. Together, this data is used to create a ‘digital twin,’ an accurate computer model that represents the physical bridge in real time. The digital twin will help engineers measure the bridge’s health and monitor how it changes over its lifespan. The sensor data will also be used to ‘teach’ the bridge to understand what is happening on it, beginning with the ability to count how many people are crossing it and how quickly.

The original design concept for the bridge was changed considerably due to engineering concerns, with Additive Manufacturing on site proving unfeasible due to safety and technical issues. In March 2017, the production and assembly of large segments of the bridge began with the final placement postponed nearly two years until the renovation of the canal walls was completed.

Gijs van der Velden, CEO of MX3D, stated, “The Bridge is only the beginning for our technology, by now MX3D has introduced its metal printing tool on the industrial market, and with this tool already many companies have started printing like us. I am looking forward to all positive impact and new ideas our client will realise.” 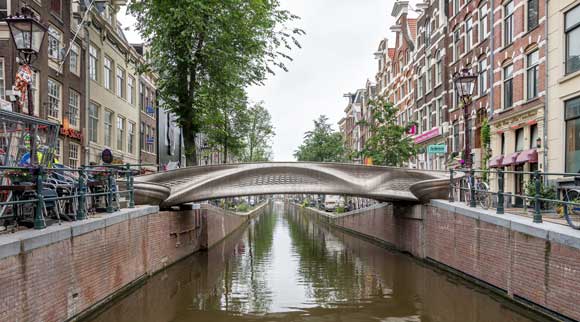