Launcher, headquartered in Hawthorne, California, USA, reports that it has been awarded $1.7 million by the U.S. Space Force to further develop the company’s additively manufactured E-2 liquid rocket engine, which was successfully tested at the NASA Stennis Space Center earlier this year.

The E-2 is a closed-cycle, additively manufactured, high-performance liquid rocket engine in development for the Launcher Light launch vehicle which has an inaugural launch scheduled for 2024. A single E-2 engine is said to be able to boost Launcher Light to low Earth orbit with 150 kg of payload.

The U.S. Space Force’s support to advance E-2 development is expected to help meet the goals of the Department of Defense (DoD) by maximising performance and payload capacity for a small launch vehicles, accelerating vehicle production, and removing both geographic and supply chain constraints for volume production.

The US Space Force stated in the US Space Force Memorandum, June 2021, “Launcher’s high performance engine design materially increases a rocket’s payload capacity by consuming less propellant while generating the same thrust. As a result, Launcher’s E-2 liquid rocket engine also has the potential to significantly reduce the price to deliver small satellites to orbit on dedicated small launch vehicles, which is a key capability and priority for the Space Force.”

Metal Additive Manufacturing and the new Space Race: The inside track with Launcher and AMCM 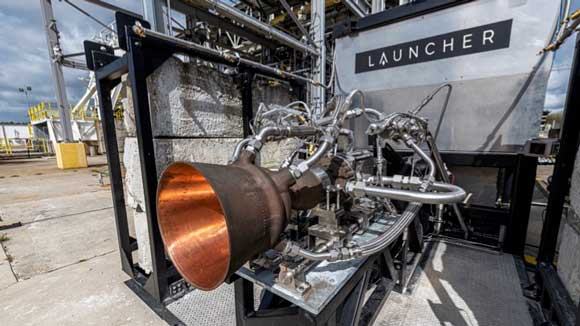