Hermeus, an aerospace company headquartered in Atlanta, Georgia, USA, has demonstrated turbojet to ramjet transition within its Chimera engine. The cost and speed at which the Hermeus team achieved this milestone is notable: Hermeus designed, built, and tested Chimera in twenty-one months for $18 million.

Manufacturing in-house allows for a tight feedback loop between engineers and technicians which is key to the company’s ability to iterate quickly. Additionally, vertical integration eases reliance on outside vendors and allows for better control of the supply chain. Another important factor in building Chimera is Additive Manufacturing; reportedly about 15% of the engine is produced via AM, which enabled rapid development.

Chimera is a turbine-based combined cycle engine (TBCC) – which basically means it’s a hybrid between a turbojet and a ramjet. The ability to switch between these two modes allows Hermeus’ first aircraft, Quarterhorse, to take off from a regular runway and accelerate up to high-Mach speeds.

At low speeds, Chimera is in turbojet mode – just like any jet aircraft. But as the temperature and the speed of the incoming air increase, turbojets hit their performance limit. This happens at around Mach 2. Chimera has a pre-cooler that reduces the temperature of the air coming into the turbojet, allowing Hermeus to squeeze a bit more performance from the turbojet before transitioning to ramjet.

At around Mach 3, Chimera begins to bypass the incoming air around the turbojet and the ramjet takes over completely. A ramjet is a simple propulsion system which ‘rams’ the incoming high-pressure air to create compression. Fuel is mixed with this compressed air and ignited for thrust. Ramjets are optimal between Mach 3 and Mach 5.

“This achievement is a major technical milestone for Hermeus,” stated AJ Piplica, CEO. “But more than that, it’s a proof point that demonstrates how our small team can rapidly design, build, and test hardware with budgets significantly smaller than industry peers.”

The testing took place at the Notre Dame Turbomachinery Laboratory, which provides heated air to simulate high-Mach temperatures and pressures.

“The Notre Dame facility allowed us to create conditions similar to what we’ll see in flight,” said Glenn Case, CTO. “Completing this testing on the ground significantly de-risks our Quarterhorse flight test campaign which will begin late next year.”

Hermeus’ TBCC engine is unique in the field of hypersonics. Most hypersonic platforms are powered by a rocket engine. But this approach makes reusability much harder and inherently more dangerous for passenger flight.

By making a full-range air-breathing hypersonic engine that does not require a rocket to accelerate, Hermeus is setting the stage for operational hypersonic flight – meaning aircraft that can be rapidly re-used.

An additional benefit of this engine design is that it accommodates existing transportation infrastructure. Hermeus aircraft are designed to be operational at traditional airports. This is important not just for hypersonic testing, but reportedly critical to Hermeus’ goal of radically accelerating passenger travel through hypersonic flight. 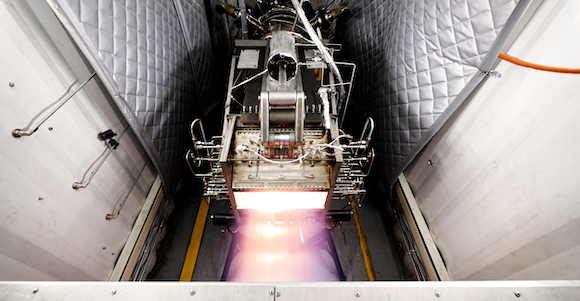