The racing team E.Stall Esslingen, of the Esslingen University of Applied Sciences, Germany, have placed fourth in the Engineering Design Competitions in Formula Student (FS) Czech and FS Alpe Adria, and first in the Efficiency Category at the FS Croatia Endurance Event. Eplus3D, Hangzhou, China, the company which additively manufactured the heat exchangers for the university’s racecar, believes these wins highlight the reliability and functionality of metal Additive Manufacturing in applications requiring lightweighting and high performance standards.

The Formula Student competition features student teams building single-seater racecars, which are then put into competition with other student designs from around the world. While speed is a factor in the judging, the driving characteristics, financial planning, and overall performance are also considered. The racing team partnered with Eplus3D to additively manufacture three aluminium components for the university’s entry.

For years, E.Stall Esslingen has been a proven competitor in Formula Student. Based on the findings of the past racing seasons, the team sought to improve the reliability of its car’s cooling system.

The previous cooling jacket used by the team was made of a temperature-resistant polymer, fitted directly around the electric drive, consisting of two shells. When using this cooling jacket, it was shown that, as a two-component solution, it is prone to leakage. Without sufficient cooling ability, the risk of damage occurring in the motor is quite high. Utilising its EP-M260 Dual-Laser Laser Beam Powder Bed Fusion (PBF-LB) machine, Eplus3D was able to produce a single-component aluminium cooling jacket, improving the cooling performance by enabling the entire surface of the jacket to dissipate heat.

“The 3D printed cooling jacket will be an efficient and reliable product,” stated a member of the E.Stall Esslingen team. “We were able to create complex structures, which is unthinkable in any conventional way. With the help of the Eplus3D and the latest Additive Manufacturing technologies we were able to reduce the wall thickness due to the high accuracy of the 3D printer and therefore reduce the overall size of the parts.”

Due to the functional integration of the cooling system, connectors and mounting, human labour is saved and the design is not prone to leakage. The minimal wall thickness of the part helps to reduce the overall diameter and, therefore, create more space for other suspension components that are based around the electric motor.

As well as the cooling jacket, Eplus3D supported the team with the manufacture of a cooling plate for the car’s inverters. Both cooling parts were said to have kept the motors and inverters below 65°C, which, according to the team, is an “unbelievably good result” compared to last season’s motor regularly hitting 120°C. The design of the cooling jacket allowed a simulated cooling capacity of 3.8 kW. Due to the low temperature of the components, the car is said to operate more efficiently, thus increasing the driving range. 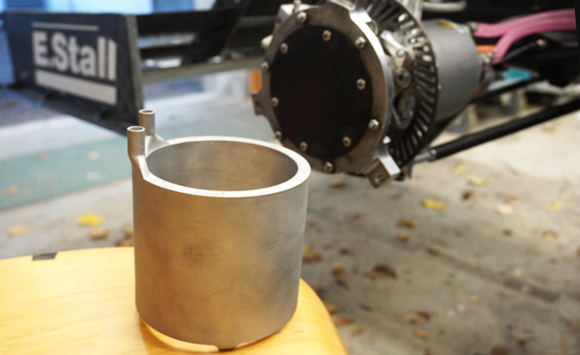