Earlier this month, the US Air Force Research Laboratory (AFRL) hosted a ribbon-cutting ceremony to celebrate the reopening of its recently renovated Additive Manufacturing Laboratory, as well as the installation of an AM machine for aerospace-grade materials. America Makes was reported to have developed the AM machine, with AFRL providing roughly $6 million in Flex-4 funding from the US Department of Defense to cover the cost of renovations.

AFRL’s Materials and Manufacturing Directorate, or RX, also hosted a Computed Tomography Laboratory tour showcasing recent infrastructure improvement and the addition of a new Computed Tomography machine and suite. The new machine is suitable for non-destructive testing of AM materials to detect and quantify internal geometry, defects, manufacturing errors and failure models.

The AFRL’s novel AM machine is based on a commercially available machine from Concept Laser, a German subsidiary of GE Additive Manufacturing. The AFRL modified the machine with a fully-open software control system intended to enable users to exert more control over how feedstock (Ni, Ti and Al alloy powders) is manipulated by laser beams.

Dr Edwin Schwalbach, research materials engineer in the Metals Development section, said he expects the addition of this new technology will allow the Department to additively manufacture more advanced materials.

“Some of the things that make certain alloys very desirable in terms of their performance often make them really finicky to process. We now have some extra knobs to help us on this front,” Dr Schwalbach stated. “We’ve also modified the system to allow us to use its multiple laser beams in a synchronised way, and to carefully control the thermal environment during printing.”

The in-situ monitoring system added to the new machine allows researchers to additively manufacture objects that match specifications for form as well as function. Adam Hicks, the programme manager for Acceleration of Large-Scale Additive Manufacturing (ALSAM) explained that the specific modifications made to the newly acquired AM machine are helping scientists and researchers tap into new AM capabilities.

“The ALSAM machine opens the ‘black box,’ which is the intellectual property ingrained in traditional Additive Manufacturing machines,” Hicks added. “The producers of commercial machines are all competing to produce superior quality and they hide those details as ‘secret sauce.’ As a part of that, they don’t allow the users of the machines to vary process parameters as much as researchers would like.”

Thanks to the modifications made to the AFRL’s machine, Schwalbach and his team have been released from these limitations. Schwalbach stated that the new technology opens a lot of doors, as the novel AM machine can make a multitude of parts in countless iterations.

“In principle, there’s very little up-front cost in terms of fixed tooling,” Schwalbach continued. “This is very attractive to the Air Force.” 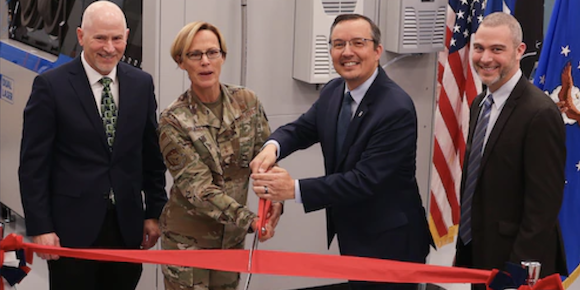