Some powders in Additive Manufacturing, especially metal powders, can react explosively with oxygen and can present a potentially serious risk to life. For such a risk to exist, the powders must be present in an explosive atmosphere with an ignition source, such as the laser which is at the heart of the Laser Beam Powder Bed Fusion (PBF-LB) Additive Manufacturing process, explains Process Sensing Technologies (PST), headquartered in Ely, Cambridgeshire, UK.

An ‘explosive atmosphere’ is a mixture of air, under atmospheric conditions, and flammable substances in the form of gases, vapours, mists, or dusts, where combustion spreads to the entire unburned combination after ignition has occurred. In addition, a ‘potentially explosive atmosphere’ is one which could become explosive due to local and operational conditions, which could be part of the process or due to a machine fault.

In the European Union, the Machinery Directive (2006/42/EC) [1] requires machinery to be designed and constructed in a way that avoids any risk of explosion posed by gases, liquids, dust, vapours, and other substances produced or used, or by the machinery itself. Practically, this can be achieved by either making the machinery sufficiently robust so that any explosion is contained within it, avoiding external hazards (in the same way as an internal combustion engine), or by eliminating ignition sources in accordance with the ATEX directive (2014/34/EU) [2].

Additive Manufacturing machines employing lasers or other high energy systems, have an ignition source intrinsic to the design, as well as the presence of a fuel in the form of the powder. Explosion prevention relies on the principle of an inert atmosphere, ensuring the concentration of oxygen in the atmosphere is reduced below the limiting oxygen concentration (LOC) of the powder used when the ignition source is present.

Inert atmospheres to prevent explosions is also covered by the ATEX directive (1999/92/EC) [3], where atmospheres are classified into zones depending on when an atmosphere capable of sustaining an explosion is expected to occur:

Oxygen analysers, such as the Ntron SIL02 available from PST, are critical in aiding the employer/operator to ensure their zones or safe areas are maintained reliably to achieve at least tolerably safe working conditions. The oxygen analysers may be used as part of the basic process control system – for control and operation of the inerting system – or separately, as an independent safety system to monitor the correct functioning of the basic process control system and initiate a suitable response in the event that a fault is detected.

[1] Directive 2006/42/EC of the European Parliament and of the Council on machinery, and amending Directive 95/16/EC 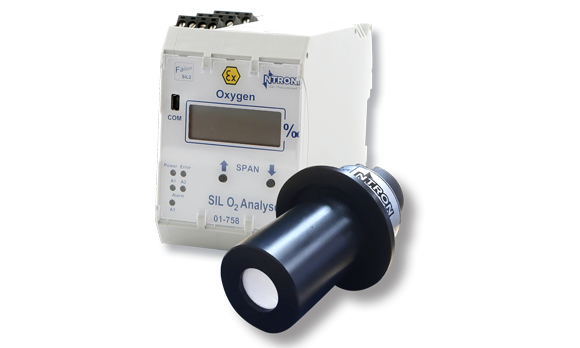