France’s Safran Group has announced that the new Safran Additive Manufacturing Campus located in Le Haillan near Bordeaux, has been inaugurated by Ross McInnes, chairman of the Safran Board of Directors, and Olivier Andriès, CEO, in a ceremony attended by Roland Lescure, French Minister of Industry, and Alain Rousset, president of the Nouvelle Aquitaine region of southwest France.

The new 12,500 m2 facility has a workforce of more than 100 scientists, engineers and technicians who produce parts for the whole group using state-of-the-art Additive Manufacturing machines for the production of aircraft and engine parts. The first 1,000 additively manufactured parts from the Safran Additive Manufacturing Campus have reportedly already been delivered to Safran Helicopter Engines. The campus aims to deliver a total of 4,000 parts this year, and to double that figure in 2023.

Safran explains that Additive Manufacturing delivers real benefits to aviation because it allows the production of parts that were impossible to make with other methods, often combining several functions in a single piece. AM is also an eco-friendly process because it limits the consumption of both raw materials and energy, while significantly reducing weight, thus cutting fuel consumption and contributing to the decarbonisation of aviation which Safran states is its top priority. In addition, AM reduces machining time, which boosts competitiveness.

“We made a strategic decision to create this new centre of excellence to consolidate Safran’s expertise in Additive Manufacturing and accelerate the application of this disruptive technology,” commented Olivier Andriès. “We will be leveraging the advantages of this technology to make our new products even lighter, while enhancing their performance – and that’s the key to meeting our industry’s objective of reducing its environmental impact. A quarter of the parts in some of our engines could eventually be made using this process.” 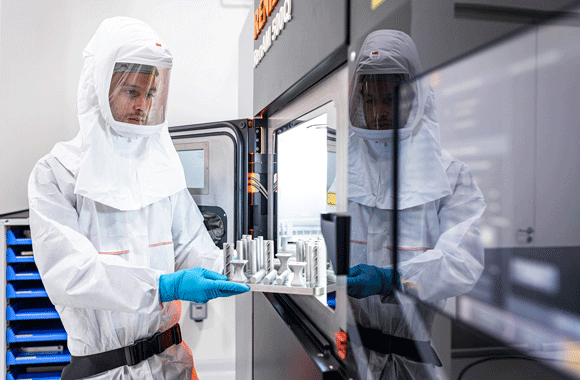