Researchers from the University of Wolverhampton; Additive Analytics and AceOn Group, Telford; University of Bristol and Anopol, Birmingham, UK, have recently published a study in Materials concerning the electrical conductivity of additively manufactured copper and silver for electrical winding applications.

Efficient and power-dense electrical machines are thought to be critical to the next generation of green technologies. One of the primary requirements for these machines is the production of optimised windings, which rely on electrically conductive materials. Additively manufacturing copper and silver windings offer manufacturers the opportunity to optimise materials, utilise custom geometries and undertake topology and thermal management via integrated cooling. However, with Laser Beam Powder Fusion (PBF-LB) Additive Manufacturing, reflective and conductive materials like Cu and Ag can pose a problem.

In ‘Electrical Conductivity of Additively Manufactured Copper and Silver for Electrical Winding Applications’, the researchers have detailed the processing of high-purity Cu, Ag and Cu-AG alloys on a 400 W EOS M290 AM machine and the resultant materials’ conductivity. Six material variants were investigated in four comparative studies, characterising the influence of material composition, powder recoating, laser exposure and electropolishing.

Looking at the impact of powder recoating and laser exposure on the processing of Cu via PBF-LB Additive Manufacturing, hard blade recoating and single-laser exposure strategies showed improvements in density, with increases of 2.8% and 2% IACS electrical conductivity for Cu when compared with soft blade recoating and double-laser exposure strategies. Electropolishing was found to improve the Cu surface roughness from Ra of 6.42 µm to 2.78 µm. Nevertheless, current densities and immersion durations twice that of electropolishing similar copper grades manufactured by other methods are required for PBF-LB-processed variants.

The paper is available here, in full. 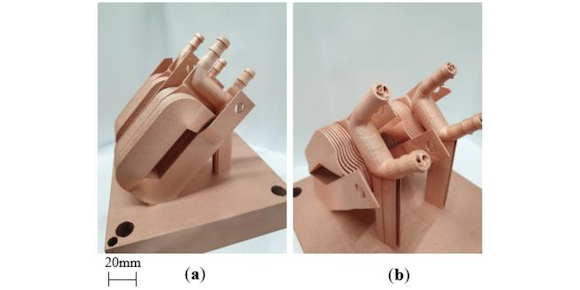