Naval Group, headquartered in Paris, France, has additively manufactured a propeller which has a 2.5 m span and consists of five 200 kg blades, for use on a French Navy minehunter. The ship’s propeller, reported to be the largest metal additively manufactured thruster of its kind, was built at Naval Group’s facility in Nantes-Indret in October 2020, using a wire-based Directed Energy Deposition (DED) process.

After arriving in Brest, the propeller was transferred to a submarine base to be mounted onto the intermediate shaft of the FS Andromède minehunter. Sea trials were successfully performed at the end of December and the propeller will now enter service in all of its operational missions.

The harsh conditions in which these ships operate mean that they must meet strict requirements in order to allow the SSF (Fleet Support Services) and DGA (French Defence Procurement Agency) to authorise the trial of the blades in normal operating conditions. Naval Group worked together with Bureau Véritas, the second largest provider of compliance and certification services, in presenting its technical justification file, which received certification.

“Obtaining military naval quality requires rigorous development,” stated Emmanuel Chol, Director of the site at Nantes-Indret. “Nearly three years of R&D – carried out by the Technical and Innovation Department in cooperation with the École Centrale de Nantes within the framework of the LabCom Joint Laboratory of Maritime Technology – went into the development of the deposition process of metal wire fusion.”

This propeller is a first step for Naval Group. A new development phase, aimed at revamping the design of other parts to benefit from AM will soon begin, with hopes of achieving acoustic discretion, weight reduction, and increased productivity. Continued production of thrusters will provide ships with growing efficacy at sea, increasing thrust efficiency, stealth and lightening the vessels.

“The assembly of this 3D-printed propeller shows great promise for the future. This new technology will enable us to considerably reduce technical constraints, and therefore allow for new manufacturing solutions for complex geometrical shapes which cannot be produced through conventional processes,” stated Eric Balufin, Director of the Naval Group site in Brest.

“This is the largest metal 3D-printed thruster ever to have been manufactured and the first propeller resulting from this technology, embarked on board a military ship and manufactured for use beyond just sea trials,” Chol added. “We witness a world first.” 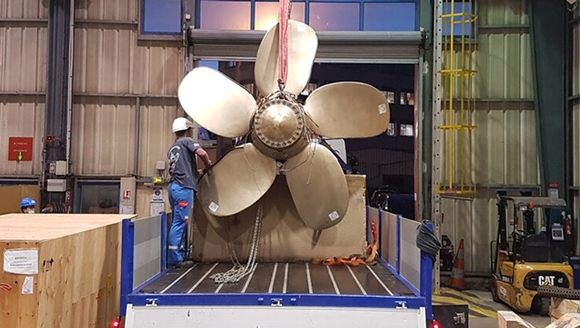