MX3D, based in Amsterdam, the Netherlands, has successfully completed the production of an industrial pipeline clamp using its Wire Arc Additive Manufacturing (WAAM) technology, a wire-based Directed Energy Deposition (DED) process. The pipeline clamps are used in the chemical and oil & gas industries to prevent safety incidents, while extending the life of an installation before maintenance is required.

As part of the TRINITY Demonstration Programme, designed to leverage advanced manufacturing technologies for the future of European manufacturing, the pipeline clamp was made and tested in collaboration with Team Industries and TiaT, two companies with extensive experience in the maintenance, testing and (emergency) repair of complex industrial pipe systems. The BWI (Belgium Welding Institute) handled the material testing and Lloyd’s Register supported MX3D with the certification process.

Short lead times are vital in the oil & gas industry, but the current lead time of pipeline repair can be as long as two to three weeks; this can translate a potential lost value of several €100,000s to €1 million per day. Current repair processes by clamps typically rely on CNC milling, specialised manual labour, or a combination of both. Each of these processes have their downsides, however: CNC milling has high material waste (on average, >80% of the original material) and specialised labourers are becoming more scarce.

During the scope of the clamp project, a typical repair part for pipelines was researched and manufactured with a hybrid WAAM process. This technique combines the advantages of traditional manufacturing (e.g., precision machining) with the advantages of WAAM (e.g., form freedom, high deposition rates and minimal material waste).

The consortium managed to reach a high level of assurance for the clamp. The BWI tested the materials and confirmed the additively manufactured material complied with key Team Industries requirements for this material. TiaT performed non-destructive testing, such as Ultrasonic Testing (UT), Penetrant Testing (PT), Radiographic Testing (RT), showing no relevant defects. TEAM Industries also performed a pressure test, which ran until the maximum pressure of the test installation (>60 Bar) without any failure.

“WAAM-produced components can offer a real advantage for the production of bespoke elements, as regularly used in, for example, piping, or for petrochemical industries,” stated Fleur Maas, Managing Director, BWI. “The alternative production methods of these (sizeable) components tend to be relatively costly, and not always able to deliver parts quickly (for example, in the case of small series, and/or where the casting mould is no longer available).”

The base and material used was ASME IIA SA-516-70, a type of steel often used in the chemical and oil & gas industries. The requirements for the mechanical properties of this material were dictated by its most common use case: pressure vessels working at medium to low temperature. The destructive tests were performed following ASTM A370. The results of these tests proved that the additively manufactured material, even in its least favourable direction, has mechanical properties similar or better than the base material, and, thus, fits the ASME requirements.

The project introduces Hybrid WAAM, a new approach intended to counter two known disadvantages of AM: the need for post-processing and precision. While large-scale AM can produce parts very fast, traditional manufacturing techniques can sometimes still be faster for the production of simple shapes. Conventional techniques can also achieve a higher level of precision than large-scale AM. By introducing a hybrid approach, the project consortium used WAAM only for the most complex geometrical parts of the clamp, while using traditional manufacturing for the simpler parts, resulting in time saved.

Hybrid WAAM is said to have several advantages over conventional technologies such as forging, CNC-milling and manual welding (requiring speciality welders) for the oil & gas industry:

By incorporating pre-manufactured standard components into the WAAM process (i.e., hybrid WAAM), each of the above-described benefits are increased by reducing lead time and manufacturing time compared to regular WAAM.

“A different way of production also means a different way of inspection,” added Andre Elling, TiaT. “This is what TiaT focused on during the interesting project. This new fabrication technology using robotic WAAM has promising results, even for high-demanding industries such as the oil & gas industry, where qualification is at the heart of the sector.“

The industrial clamp will be on display at MX3D’s booth at Formnext 2021. 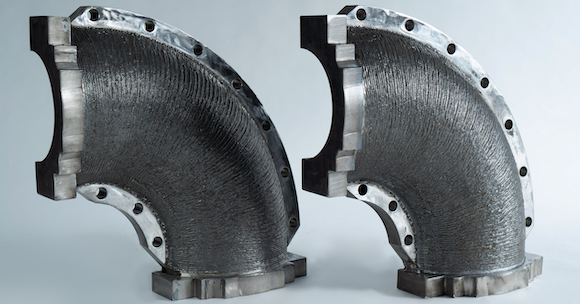