France-based AddUp subsidiary Poly-Shape has produced a range of metal additively manufactured parts for official Porsche driver Romain Dumas, to be installed on his buggy DXX for the Dakar 2021. The company first collaborated with Dumas in 2017, when the racer won the Pikes Peak Race, USA, with a car equipped with a hub carrier metal additively manufactured by Poly-Shape.

The 43rd edition of the Dakar race will take place in Saudi Arabia between sand dunes and desert landscapes, testing crews and mechanics considerably. To achieve success in this arena, vehicles must be highly reliable and able to offer continuously high performance. Two of the most critical factors are lightness and robustness, both of which can be enhanced through the use of metal AM.

Poly-Shape produced a number of strategic parts for the DXX buggy, using Laser Beam Powder Bed Fusion (PBF-LB). Among them was an ergonomic gear lever, whose knob was additively manufactured to the exact shape of the driver’s hand to simplify the driving experience.

The gear lever was produced by PBF-LB in titanium, and, thanks to the use of topological optimisation, benefited from a 60% mass reduction compared to the conventionally-manufactured equivalent and resulted in raw material savings – thus, a lower production cost.

The use of AM also made it possible to integrate additional functions into the gear lever. A cable gland is now embedded in the part, allowing the strain gauge installed on the gear lever to be fed without disturbing the racing driver.

In addition to the gear lever, Poly-Shape designed and produced the three pedals in the vehicle according to the forces exerted by the driver during the race. The result was an average weight saving of 42% compared to the original pedals, and higher sturdiness through the use of titanium as the production material.

Also installed on the buggy was an additively manufactured Inconel exhaust ball joint, which had already been equipped on cars competing in the World Rallycross Championship (WRX). French engineering company Pipo Moteurs approached Poly-Shape for a solution to improve its exhaust line bellows, which were prone to break or cause fires during races, by optimising the design of a ball joint.

The result of this collaboration was a spherical ball joint named PSPM, designed to meet the geometrical, mechanical and thermal constraints imposed by the engines. Drawing on AddUp’s knowledge of expansion phenomena and stripping techniques, Poly-Shape and Pipo Moteurs were able to achieve a precise adjustment between the two sections of the ball joint, which is additively manufactured in one piece to a high surface finish. 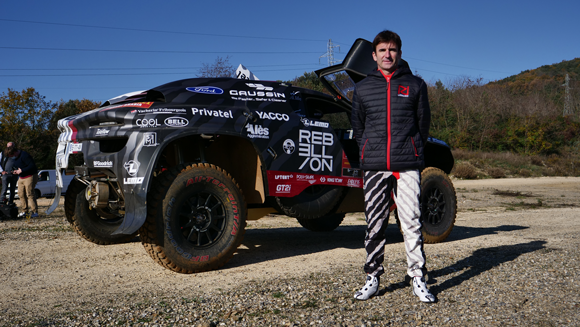