Researchers from Lawrence Livermore National Laboratory (LLNL), California, USA, have been working to address issues such as defects and poor mechanical performance that can arise during laser-based Additive Manufacturing techniques for metal parts. The researchers have explored alternative shapes to the Gaussian beams commonly used in high-power laser-based AM processes such as Laser Beam Powder Bed Fusion (PBF-LB).

In a paper titled ‘Nondiffractive beam shaping for enhanced optothermal control in metal additive manufacturing’ published by Science Advances, the researchers experimented with exotic optical beam shapes known as Bessel beams — reminiscent of bullseye patterns — which possess a number of unique properties such as self-healing and non-diffraction. They discovered that the application of these types of beams reduced the likelihood of pore formation and ‘keyholing’.

LLNL researchers explained that the work indicates that alternative shapes such as Bessel beams could alleviate the main concerns in the PBF-LB technique: the large thermal gradient and complex melt pool instabilities occurring where the laser meets the metal powder. The issues are reported to be predominantly caused by Gaussian beam shapes that most off-the-shelf, high-power laser systems typically output.

“Using Gaussian beams is a lot like using a flamethrower to cook your food: you don’t have a lot of control over how heat is deposited around the material,” stated Thej Tumkur Umanath, lead author and LLNL research scientist. “With a Bessel beam, the fact that we redistribute some of that energy away from the centre means we can engineer thermal profiles and reduce thermal gradients to aid microstructural grain refinement and, ultimately, result in denser parts and smoother surfaces.”

Tumkur, who also won a first-place award at LLNL’s 2019 Postdoc Research Slam! competition for the work noted that Bessel beams significantly expand the laser scan parameter space over traditional Gaussian beam shapes. The result is ideal melt pools that are not too shallow and don’t suffer from keyholing — a phenomenon in which the laser creates a strong vapour and causes a deep cavity in the metal substrate during builds, as LLNL researchers have previously found. Keyholing creates bubbles in the melt pool that form pores and leads to degraded mechanical performance in finished parts.

An additional drawback of conventional beams is that they are prone to diffraction (spreading) as they propagate. Bessel beams afford a greater depth of focus due to their non-diffractive properties. Consequently, the authors observed an increased tolerance to the placement of the workpiece with respect to the laser’s focal point using Bessel beams. Placement is a challenge for industrial systems that often rely on expensive and sensitive techniques for positioning an in-progress build within the focused beam’s depth of focus each time a layer of metal powder is deposited.

Tumkur added, “Bessel beams have been used extensively in imaging, microscopy and other optical applications for their non-diffractive and self-healing properties, but beam-shape engineering approaches are rather uncommon in laser-based manufacturing applications. Our work addresses the seeming disconnect between optical physics and materials engineering in the metal Additive Manufacturing community by incorporating designer beam shapes to achieve control over melt pool dynamics.”

The LLNL team shaped the beams by running the laser through two conical lenses to produce a doughnut shape, before passing it through additional optics and a scanner to create ‘rings’ around the central beam. Installed in a commercial AM machine in LLNL’s Advanced Manufacturing Laboratory, the researchers used the experimental setup to additively manufacture cubes and other shapes from stainless steel powder.

Through high-speed imaging, researchers studied the dynamics of the melt pool, observing a substantial reduction in melt pool turbulence and mitigation of ‘spatter’— the molten particles of metal that fly from the laser’s path during a build — which generally leads to pore formation.

In mechanical studies and simulations, the team found that parts built with Bessel beams were denser, stronger and had more robust tensile properties than structures built with conventional Gaussian beams.

“Industry has long sought the ability to increase control of the LPBF process to minimise defects,” said Ibo Matthews, principal investigator on the project prior to becoming LLNL’s Materials Science Division leader. “Introducing complex structure to the laser beam adds increased flexibility to precisely control the laser-material interaction, heat deposition and ultimately the quality of the prints.”

“Simulations allow you to get detailed diagnostics of the physics taking place and therefore allow you to understand the fundamental mechanisms behind our experimental findings,” Khairallah said.

Tumkur added, “There’s a big need to produce parts that are robust and defect-free, with the ability to print very large structures in a cost-effective fashion. To make 3D printing truly compatible with industrial standards and move beyond conventional manufacturing approaches, we need to address some fundamental issues that occur at very short temporal regimes and microstructural scales. I think beam shaping is really the way to go because it can be applied to print a wide range of metals ubiquitously and be incorporated into commercial printing systems without posing significant integrability challenges as other alternate techniques tend to do.”

LLNL researchers are currently experimenting with other beam shape engineering strategies as part of an ongoing partnership with GE Global Research and are planning to investigate complex laser beam and polarisation-shaping approaches for greater control over the quality of additively manufactured parts. 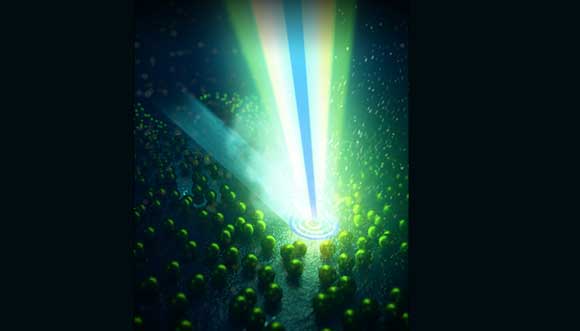