Linde, a global industrial gas specialist headquartered in Guildford, Surrey, UK, and EOS GmbH, headquartered in Krailling, Germany, partnered to conduct a study into the influence of oxygen in the process chamber, and its effect on the critical properties of the aluminium alloy AlSi10Mg. Results of the study, conducted in 2020, could be fundamental in advancing optimal, repeatable and reliable Additive Manufacturing of the alloy.

Linde’s Additive Manufacturing oxygen monitoring technology – ADDvance® O2 precision – has been credited as being instrumental to achieving the unequivocal and highly accurate results not only by Linde’s AM engineering team, but that of the EOS team.

“EOS is one of the world’s leading technology suppliers in the field of industrial 3D printing of metals and polymers, so to be selected to jointly work with them to progress the future of aluminium alloy printing is testament to our atmospheric gas and materials expertise,” stated Pierre Forêt, Senior Expert Additive Manufacturing, Linde. “We are delighted that our ADDvance O2 precision monitoring technology has made such a big contribution to accurately measuring those all-important oxygen levels.”

Even after the most rigorous purging of the build chamber atmosphere, it is possible for minor impurities to still remain present. Extremely small variations in oxygen levels can impact the mechanical properties of alloys sensitive to oxygen – including process-induced aging of the metal powder.

Twenty-one build jobs were performed on the EOS M 290 system, with varying residual oxygen concentrations (ranging from 1000 ppm to 5000 ppm) within the process gas atmosphere. Three oxygen sensors were placed at different locations within the chamber: one on top of the process chamber, one in the recirculation filter system, and the other in the ADDvance O2 precision system, which was closest to the powder bed and calibrated to an oxygen level of 500 ppm to guarantee precise measurement.

The ADDvance O2 precision was initially set on analysing mode, only tracking the oxygen level, and was later set on control mode by taking over the regulation of the oxygen level within the process gas.

To establish a benchmark, the first three building jobs were undertaken using EOS’s standard conditions (oxygen levels under 1000 ppm). With the help of the precise sensor in the ADDvance O2 precision, more exacting measurements could be carried out, with deviations between that sensor and the EOS M 290’s sensors then mapped.

In addition to boosting the accuracy of oxygen level readings, when the ADDvance O2 precision was set to control mode to regulate the atmosphere, it delivered much greater consistency in the oxygen levels.

“For EOS, a consistent and reliable gas atmosphere, as well as accuracy of oxygen gas readings, is vital for us because it is vital for our customers”, stated Dr Astrid Rota, Head of Metal Process Technology, EOS. “Some industries require not only the most advanced printing systems generating best material quality, but also need to record highly detailed data which is where the ADDvance O2 precision really delivers.”

On completion of the study the following findings were confirmed: 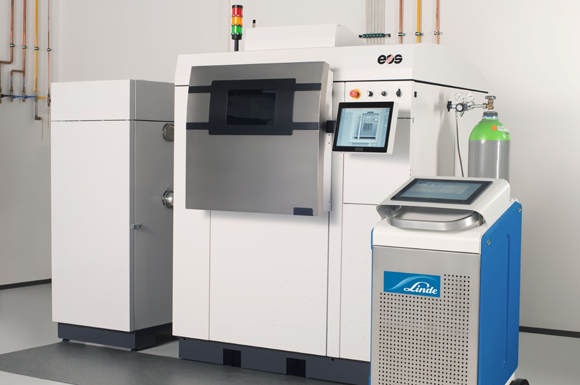