Since 2017, Launcher has been an AMCM partner and the collaboration has resulted in the development of the AMCM M 4K, which has a part construction volume of 450 mm x 450 mm x 1000 mm and supports copper alloy, the most advanced material for liquid rocket engine combustion chamber production.

“The major advantages of metal AM in the production of liquid rocket engines is lower cost to manufacture and allow for complexity in design – a common barrier-of-entry with conventional manufacturing technologies,” stated Martin Bullemer, Managing Director of AMCM. “Furthermore, the development times are dramatically lessened and design flexibility is expanded. The result of these benefits is improved propulsion systems that use less propellant, carry larger payloads, and enable new ideas and applications to take flight. Additive Manufacturing is revolutionising the space industry and innovative companies like Launcher are taking advantage of this advanced 3D printing technology.”

In addition, while most companies developing an additively manufactured liquid rocket engine rely on Inconel alloy as their combustion chamber material, copper alloy is said to be the best material for liquid rocket engine combustion chambers due to its optimal thermal conductivity properties, which enable more effective regenerative cooling. Informed by NASA research on additively manufactured copper, Launcher requested copper alloy support in 2017 for the AMCM M 4K machine from AMCM and EOS.

Max Haot, founder and CEO of Launcher, commented, “AMCM’s flexibility and openness to customer requirements, both in machine building and process implementation, is remarkable. We look forward to continuing our partnership with AMCM as Launcher advances its mission to build and operate the market’s most efficient rockets delivering satellites to orbit.”

For more background on Launcher and AMCM GmbH, read our ‘Metal Additive Manufacturing and the new Space Race: The inside track with Launcher and AMCM’ lead article in the Winter 2020 issue of Metal AM magazine. 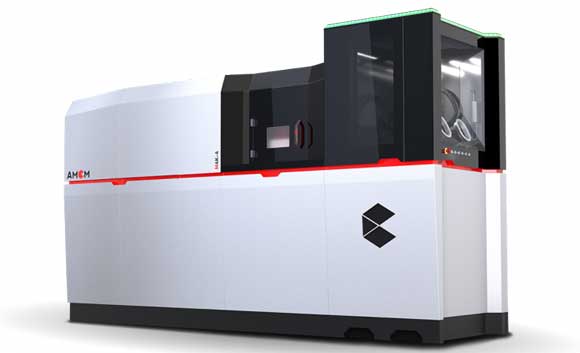