The newly-launched 2021 Alfa Romeo Racing Orlen F1 race car, the C41, manufactured in partnership with Additive Industries, Eindhoven, the Netherlands, will take to the track with 304 additively manufactured metal parts, more than doubling the number from 2020’s C39 race car.

The parts for the C41 were produced on the MetalFAB1 AM machine from Additive Industries, with some 22% of the 304 parts made from Ti64Gd23, 36% from Scalmalloy, 40% built from AlSi10Mg and 2% in stainless steel. The total combined weight accounts for approximately 14,860 g, a comparatively small increase over last year’s 13,140 g considering the 113% parts increase.

Cost savings of up to 90% per part, in comparison with traditionally manufactured parts, has also been a major benefit for Sauber Motorsport AG, the Swiss company which manages and operates the Alfa Romeo Racing Orlen team. These savings come not only from lighter parts and higher productivity, but also from having direct access to MetalFAB1 machines.

“By having the MetalFAB1 systems in-house, and not outsourcing externally, it helps us to achieve an important element of the cost cap,” commented Jan Monchaux, Technical Director. 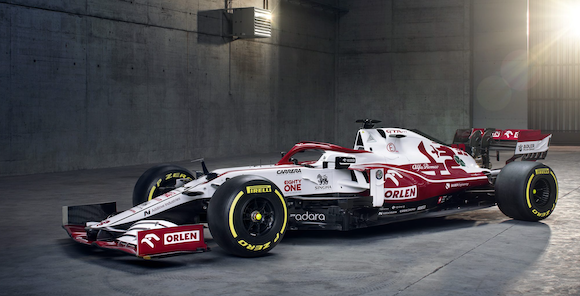