As Additive Manufacturing processes continue to grow in complex industries such as aerospace, the number of companies turning to industrial Additive Manufacturing increases. The Fraunhofer Institute for Material and Beam Technology IWS Dresden has developed a powder measuring device for laser cladding, the POWDERscreen, to streamline the use and adoption of highly automated production lines.

In the future, this powder flow meter is hoped to make it possible to measure exactly which metals flow in what quantity into the laser focus. This approach can reduce the costs of powder-based laser cladding, improve the quality of the components produced and make the entire production process repeatable.

“So far, powder-based laser cladding still falls short of its potential,” stated Rico Hemschik, the engineer at Fraunhofer IWS who has developed POWDERscreen. “With the powder flow meter, we are taking a big step towards a more efficient, controlled and automated Additive Manufacturing process.”

To make this possible, the system combines modern sensor technology with special software, a screen, and interfaces for data transfer. Photosensors count the particles in the powder stream, and the software uses them to calculate the feed rates. The screen displays the processed data to the machine operator.

POWDERscreen can be mounted on any process head for powder laser cladding; one application example thought to illustrate its strengths well is the COAXquattro nozzle. This process head was developed at Fraunhofer IWS to feed up to eight different powders or wires in separate channels into the laser focus to produce in-situ alloys. Since the COAXquattro supports up to 30 g per second per channel, significant powder rates can be achieved. Because of the large feed rates, the combination of COAXquattro and POWDERscreen is said to be particularly suitable for high-performance processes in which large and complex components have to be produced, coated or repaired with high quality, reproducibility and speed.

POWDERscreen can also be combined with other process monitoring systems developed by Fraunhofer IWS. These include the Emaqs camera for process control, the COAXjay sensor box or the LIsec measurement system for powder cone geometry. Via its interfaces, POWDERscreen can be integrated together with these devices into modern industrial environments or solutions for the Industrial Internet of Things (IIoT). For example, analog data output is possible via a voltage interface, via the IIoT protocol “Message Queuing Telemetry Transport” (MQTT) or data transfer via software.

In the future, such combined process monitoring systems may also be used to independently generate digital twins of additively manufactured components. The information about where the laser melted, alloyed and shaped which powder and in what quantity can in principle also be automatically merged into a virtual computer model. The researchers at Fraunhofer IWS also see application potential for POWDERscreen in the aerospace industry, among others. There, for example, the system can be used to reproduce and repair intricately shaped turbine blades with the Additive Manufacturing processes in consistently high quality. 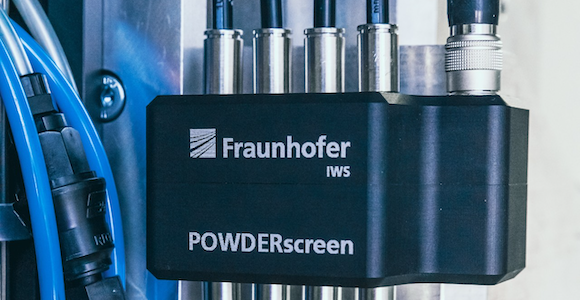